Deirdre Mortell is Cork Person of the Month

3 May 2022
By Elaine Murphy
elaine@TheCork.ie

Deirdre Mortell has been announced as April’s Cork Person of the Month for her contributions to social innovation and philanthropy in Ireland.

Deirdre is the CEO of Rethink Ireland, which is an organisation that provides cash grants and business support to the social innovations that are making a real difference across Ireland. They fuel these innovations with the knowledge and the advice they’ll need to succeed on a nationally impactful scale.

Since 2016, Rethink Ireland has provided support to 333 social innovations through 36 different funds, which in turn have created at least 677 jobs in the not-for-profit sector. These funds supported over 1000 people into employment and reached over 530,000 people nationwide.

Through her work with Rethink Ireland, Deirdre has supported 25 Cork-based social innovations over the last 6 years such as the Rainbow Club in Mahon, the Cork Life Centre in Sunday’s Well, and Sensational Kids in Clonakilty, as well as SiSi in Schull. In 2021 alone, Rethink Ireland supported 7 Awardees headquartered in Cork who employed 21 people, were supported by 75 volunteers and delivered services to 1,117 people. 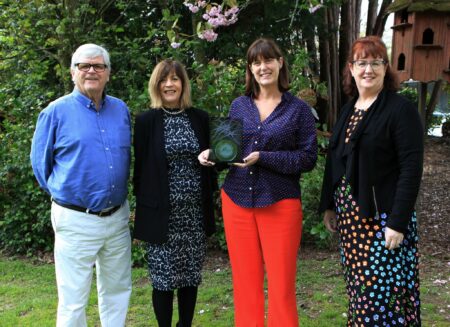 Deirdre is a founding Board member of Women for Election, a non-profit which inspires, equips and informs women to run for political office.

Prior to her current role, Deirdre co-founded and led the ONE Foundation as their CEO for ten years, leading the support of high potential non-profit organisations in Ireland and Vietnam to deliver their goals. During this time, she was part of the launch teams for Jigsaw, now a nationwide youth mental health service, and Social Entrepreneurs Ireland.

Deirdre is CONNECT’s Social Entrepreneur in Residence and has worked in Ireland’s leading non-profit organisations, holding senior roles in fundraising & communications in Oxfam and Barnardos.

She has also co-written a book entitled, ‘Establishing a Venture Philanthropy Fund in Europe: A Practical Guide’.

When asked in an interview with the HR consultancy Voltedge what the slogan ‘Stronger Together’ means to her, Deirdre said that: “COVID19 has reminded us of the power of neighbourhood and community. My neighbours are closer than we have ever been. All we need to do now is to channel that social capital as we emerge from this pandemic into ensuring we build a just transition from it – closing the inequality gaps that have been widened by COVID19 – and ensuring that we prepare for the climate challenge as we do so.”

Speaking about Deirdre’s Cork Honour, Awards organiser, Manus O’Callaghan, said “I would recommend that people look at Rethink Ireland’s website to see the enormity of their work. Projects they have been involved in include Foodcloud, iScoil and Women’s Freedom From Fear Fund. They say the apple doesn’t fall far from the tree, and Deirdre’s father Michael Mortell, past president of UCC, was a winner of the Cork Person of the Year award back in 1994.”