In Alexandria, Virginia, USA on June 22nd the International Association for Dental Research announced Professor Doctor Edward Lynch as the recipient of their Distinguished Scientist Pharmacology/Therapeutics/Toxicology Research Award. Lynch was honoured during the virtual opening ceremony of the 100th General Session of the IADR.

Originating from Cootehill in Co Cavan, Lynch earned his BA, BDentSc at Trinity College, Dublin with distinctions in Prosthetic Dentistry and Conservative Dentistry, and subsequently received an MA from TCDsuccessfully becoming a Fellow in Dental Surgery from the Royal College of Surgeons in Edinburgh. He then earned his PhD at the University of London in the Faculty of Medicine, where he worked for 20 years before becoming Professor of Restorative Dentistry in Queens University Belfast and Consultant to the Royal Hospitals for 10 years. He left Belfast to become the Head of Dentistry at Warwick Medical School at the University of Warwick. During that time, he was the first and only dentist to receive a Warwick Award for Teaching Excellence. He has been awarded the Fellowship from the Royal College of Surgeons in London and the Academy for Dento-Facial Aesthetics (USA). He is also the first ever Dentist from Ireland and the UK to be awarded the prestigious Fellowship from the American Society for Dental Aesthetics. More recently, he moved to the USA to be a Professor in the Department of Clinical Sciences and Principal Director of Biomedical and Clinical Research at the School of Dental Medicine at the University of Nevada. He is currently listed in the Top 100 Doctors in Dentistry Worldwide. He has also been elected as the most influential person in UK Dentistry in 2010 by readers of Dentistry

Edward’s awards also include the 2010 Outstanding Achievement Award at the UK Dentistry Awards, a lifetime achievement from the International Association for Ozone in Healthcare for Services to Research and Teaching in 2013 and prize for the best Worldwide Research in Ozone in Medicine, Veterinary and Dentistry in 2018 and a Lifetime Achievement award from the Ozone Therapies Group and Frontiers in Ozone Group at their joint annual meeting in Santa Barbara. 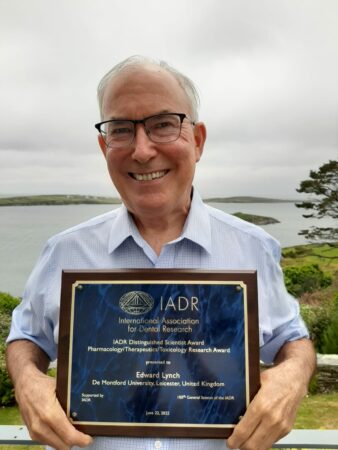 Professor Lynch is a registered Specialist in three specialties, Restorative Dentistry, Endodontics and Prosthodontics and previously was also a BUPA Consultant in Oral Surgery.

He is one of the few Dentists to have been elected to the Livery of the Worshipful Society of Apothecaries and is also honoured with being a Freeman of the City of London. He says this is very useful as it allows him, amongst many other privileges, to legally walk sheep across London Bridge. Since the USA Professorship, he moved back to Ireland where he is now an Honorary Professor at De Montford University and is enjoying life in Schull in West Cork where his wife, Helene, runs the Exclusive Luxury five star retreat called The Fastnet Hotel, West Colla, Schull. He continues to supervise a group of PhD students and is very active on the editorial board of numerous prestigious International Journals including Scientific Reports and Nature, all of which he works for with no fee. Lynch has just completed a new textbook on the management of medical emergencies with a colleague, Dr Chet Trivedy, and he hopes this book can help save many lives annually. He and Chet have donated all the commission fees and royalties from this book to a charity to support conservation of tigers in India. Lynch is involved with many charities regularly donating and fundraising for them.

Professor Lynch stated after receiving the award “I feel honoured to receive this prestigious award from my academic peers. However, I dedicate this to all my co-workers and colleagues, with whom I have worked during the past 42 years. Without their help, guidance and support, I would never have today received this very prestigious award from The International Association for Dental Research. Therefore, I dedicate this award to my wonderful colleagues, and, of course, my wife Helene and Family who have to put up with me every day!”

His research strengths started with investigations into improving glass ionomer resins; he then moved on to studying root caries management and how best to manage the microorganisms responsible for root caries. He also delved into Nuclear Magnetic Resonance and other studies to investigate oxidation products present in the oral cavity as a function oral care product use. Overall, Lynch has published more than 600 book chapters, reviews, case reports and peer-reviewed publications. Lynch’s research has been cited in prestigious journals around 8600 times (Google Scholar, Edward Lynch). He has been awarded number national and international awards for his research.

The Pharmacology/Therapeutics/Toxicology Research Award is an annual IADR Distinguished Scientist Award and is one of the highest honours bestowed by them. The Award is made for outstanding and sustained peer-reviewed research that has contributed to our knowledge of the mechanisms, efficacy or safety of drugs used in dentistry and consists of a monetary award and a plaque.