Brian Dillon (1830 – 17 August 1872) was an Irish republican leader and a member of the Irish Republican Brotherhood (IRB). He was a central figure in the Cork Fenian movement and after being arrested in 1865 for felony treason, was found guilty and sentenced to 10 years’ penal servitude. Since his health was poor, he was given amnesty after 4-and-a-half years. He returned to Cork to an enthusiastic welcome but died eighteen months later. His grave is at Rathcooney Graveyard, Cork.

Dillon has been remembered this week in a series of events. Below is the text of Taoiseach Micheal Martin’s prepared speech at the Brian Dillon Commemoration, Cork, 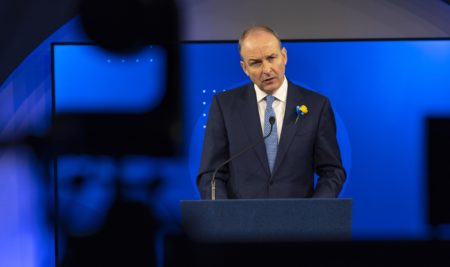 For the last century Cork’s place as a leader of revolutionary Ireland has been secured by the extraordinary deeds of our men and women during the War of Independence.

However, this tradition goes back even further and central to this was the role played by Brian Dillon.

When over 8,000 people gathered here for his burial 150 years ago Dillon’s name was known throughout Ireland. He was renowned a leader in the cause of Irish separatism, a man who endured great suffering and cruelty but never wavered in his beliefs.

The campaign for his release from jail and the outrage at his treatment was a major demonstration of the feelings of the people of Cork and their political objectives.

Brian was born in Glanmire in 1830, a time of emerging hope and activism for Irish nationalism. The first mass political movement in world history had been organised and his family was part of a rising political class which resisted the stranglehold which government from London imposed.

His family kept a tavern at a crossroads which came to be named after them – and when he inherited it, it became for two decades the centre of republicanism in our city.

Brian’s life was profoundly impacted by a childhood fall which restricted his growth and caused a painful curvature of his spine. It made him distinctive in the company he kept and also undermined his ability to survive the deprivations he faced in his final years.

He was also shaped by the most defining moment in modern Irish history, the Great Famine. He was lucky that his family was well-off enough that he did not personally suffer, but he shared with the rest of the country the deep trauma felt by a people abandoned to the cruellest of fates.

While his formal education was limited, he was clearly very intelligent and secured a job as a writing clerk for a firm of solicitors.

And from 1850 onwards he dedicated all of his free hours to participating in and building nationalist organisations – with the family tavern becoming the headquarters of this activity in Munster.

His special contribution was as a member of the IRB.

He was sworn into the organisation by James Stephens himself, and under his leadership Cork became viewed by the crown administration as “the capital of fenianism”.

When the authorities decided to implement a crackdown Dillon was identified as a priority target and was arrested in 1865.

He was defended in court by the great advocate and home rule leader Isaac Butt, however it became clear immediately that the outcome of the trial had been decided in advance.

His frailty meant that the terrible conditions and constant labour which he was forced to carry out in Pentonville Prison caused a rapid deterioration in his health – something which caused outrage here in Cork and let to a three year campaign for his release.

In 1868 Cork Corporation, including unionist members, called for him to be immediately returned home. Ultimately it was in February 1871 that he was emerged from prison and was met by huge crowds on the streets of Cork.

However, his health never recovered and he died 18 months later -honoured in the following days by the largest public funeral of its time in our city.

The scale of his fame and his resonance with the people of Cork in particular speaks not just to his significance but also to the endurance of republican sentiment in the face of all of the repression and trauma of the nineteenth century.

The spirit of true republicanism has always been about responding to the needs of the people and looking to find new ways forward. The Fenians were not simply trying to replicate what had gone before them and they were committed to picking up from the floor a demoralised people defined by a rapidly falling population and widespread poverty.

We remember the heroism of different republican generations, and in particular those who secured our independence, because of the new opportunities which they created and the future they allowed us to build.

In Cork City, the name of Brian Dillon is forever linked to the GAA club which is named after him. As the Association was expanding in Cork, with new clubs being founded all the time, the club formed in 1910 near Dillon’s Cross chose to name itself proudly after a great local hero who many still remembered.

The GAA in our city was not only at the centre of a vibrant national revival it has been the foundation of our strong communities and local identities.

It is a place where passionate rivalry reinforces what binds us together – and where both tradition and modernity meet.

As Cork began to grow and to project its strong political and cultural face Brian Dillon was a central and vital figure.

150 years after his passing it is fitting that we gather here to remember him, to honour him and the reaffirm our respect for his life and his sacrifices.