Labour TD, and Chairperson of the Oireachtas Finance Committee, Ciaran
Lynch has given a measured welcome to news that Bank of Ireland are
lowering their interest rate on split mortgages, but stated he
believes the bank needs to go even further so its approach is
consistent with other banks.

The Cork South-Central TD was responding to confirmation from Bank of
Ireland’s CEO, Richie Boucher, that the bank is lowering the interest
rate for customers on variable rates who avail of split mortgages.

“I would give a measured welcome to this decision by Bank of Ireland
to soften its approach to those on split mortgages, specific to those
on the variable interest rate. I also note that it is a direct outcome
of the bank engaging with the Finance Committee in recent weeks at
which this concern was brought to their attention.

“However, I don’t think it goes far enough. It continues to be the
case that Bank of Ireland is keeping the non-active side of the
mortgage ‘live’ by requiring customers to continue paying interest on
the warehoused portion of the mortgage. By insisting that distressed
customers do this, Bank of Ireland is completely out-of-kilter with
other financial institutions like AIB or Permanent TSB who charge no
interest. Not only is it leading to inconsistency across the banking
system, but it is also resulting in an inconsistent approach to
distressed Bank of Ireland customers as it differentiates between
those on tracker and those on the variable interest rate.

“Whilst we must be thankful that some progress is being made, we need
the approach to be more consistent. I would also encourage Bank of
Ireland to explore other solutions, such as the concessionary mortgage
resolution being offered by Ulster Bank at the moment.

“This issue of inconsistency was raised with the Governor of the
Central Bank, Patrick Honohan, when he appeared before the Committee
last week and I was assured that he intends to look into it as part of
a broader auditing exercise into Bank of Ireland. People need to be
offered sustainable, long-term solutions that enable them to work
their way out of debt and see a light at the end of this tunnel.

“I hope Governor Honohan will heed the concerns of the Committee and
act accordingly.” 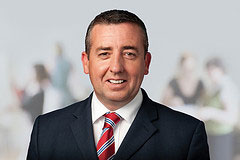