Murphy’s Stout and Beamish Stout are pleased to announce a multi-year partnership with the Cork GAA Senior Hurling and Football teams under the title of ‘Proud Partner’. The relationship between the two stouts and Cork GAA initially goes back as far as 1891, when Murphy’s founder James J Murphy donated a fifty guinea cup to the Cork County Board. Beamish later sponsored the County Senior Beamish Shield in the early 1900’s.

“Murphy’s and Beamish have a great history of supporting Cork GAA back as far as the 19th century and we are delighted now to announce a new three year relationship. We see this current partnership as a great fit between two iconic Cork brands.”

Mr Bob Ryan, Chairman of the Cork County Board welcomed the partnership. He said: “Beamish and Murphy’s have been valued supported of Cork GAA in various ways for many years. Their support and hospitality of Cork All-Ireland senior teams has been ongoing. We appreciate this initiative and are confident that it will be of considerable mutual benefit.”

“We are really looking forward to following Cork GAA on its journey over the next three years,” continued Mr. Cassidy, “and we will ensure our loyal consumers are included in the partnership by offering them opportunities to win tickets to Cork GAA matches and prizes through our online media platforms.”

The Cork GAA announcement coincides with the return of the Murphy’s ‘When It Rains It Pours’ app, allowing users the chance of redeeming a free pint of Murphy’s when it rains in Cork. To celebrate the partnership with Cork GAA, the app will now release 1000 free pints when Cork Senior Teams play, during the promotional periods.

“As the two codes have entered a new season so positively, with new players and coaching staff involved, it seems like the right time for Murphy’s, Beamish and the people of Cork to get behind both teams and lend our support at what feels like the start of a new era,” 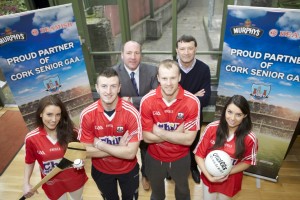