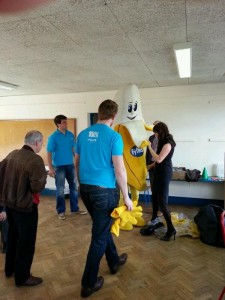 Rugby’s Donncha O’Callaghan has visited his former primary school in Bishopstown
to talk about efforts being made by UNICEF to eradicate polio in the next 4 years.

The Munster and Ireland lock is a UNICEF ambassador and recently returned from a four-day fact finding trip to Nigeria.

O’Callaghan was “in school” today because Ffyves bananas – in conjunction with UNICEF – have launched a childrens art competition, where primary pupils are being asked to design posters promoting the message of the campaign.

Bannana company Ffves will purchase an additional vaccination for each entry received.

Donncha says UNICEF is doing much needed work in Africa in particular. The winning child will enjoy VIP day out with Donncha at the Aviva Stadium, or Thomond Park.