Listen to this article

Good news today for Cork City business. The granting of planning permission by Cork City Council for the €50 million redevelopment around the old Capitol cineplex, the 0.63 acre city centre site with frontage to both St. Patrick’s Street and the Grand Parade and adjacent to the English Market. The JCD project will provide capacity to deliver 450 new jobs for Cork, in addition to 200 construction jobs, creating a new iconic and timeless landmark for Cork and breathing much welcomed new life to the west side of the city centre.

The Capitol, taking its name from the former cinema, which was a meeting point for generations of Corkonians, but which sadly lay derelict for years. The project which is fully funded, has been described by Colliers International as “a game changer” for Cork city centre. JCD are also responsible for numerous developments in the City including City Gate in Mahon and the successful One Albert Quay office development, which is currently under construction and is expected to be completed by February next year, with over 1,700 people working in this new riverside Gold LEED standard office building. Detailed design of The Capitol building is currently ongoing and construction works will begin shortly. It is expected The Capitol will be open for business at the beginning of 2017. 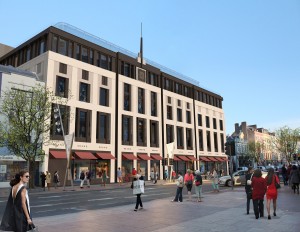 JCD has an excellent track record in promoting the Cork region and their developments to major Irish and international players in Ireland, mainland Europe and the US. John Cleary stated

“We are very encouraged by the level of interest expressed in this unique location and are in detailed negotiations with well-known retail brands in relation to locating in the development which will really add to the existing retail mix in the city centre.”

“The 36,000 sq ft of next generation office space with capacity for up to 350 people, will also be a welcomed addition to the city centre and has a huge amount to offer to occupiers situated in the heart of the city. These large floor plate offices will be built to the highest global standards with full LEED accreditation (the US gold standard for sustainability) and use of the latest, efficient and sustainable technology. Our experience has shown that delivering new grade A office space at up to 50 per cent of the cost of the greater Dublin area, combined with Cork’s highly educated talent pool, has made Cork a European destination of choice for many multinational companies.”

The Capitol has strong links to the retail heritage of Cork, with some of the new retail space located on the site of the Grand Parade section of Grant’s Department Store; this section of the famous Cork retail establishment was destroyed by fire in 1944. John added “Being acutely aware of the importance of this high profile site, we have been working closely with our architects, the award winning and Cork based Wilson Architecture and have liaised closely with the City Architect, to create something that was in keeping with the city and its people. The new development will give shoppers from Cork and beyond a very strong reason to return to shopping on the west side of St. Patrick’s Street, create a new street onto the English Market and transforming Market Lane into a vibrant meeting point.”

Also the fondly remembered and iconic Oyster Tavern, established in the 1800’s will be restored to its former glory with an upmarket restaurant and bar, with produce sourced from the neighbouring English Market.

“The decision announced today is one of the most significant for Cork city centre for decades. This development has the capacity to hugely increase footfall at the Grand Parade end of the city and will bring at least 2 new major retailers to the city centre. This is a high end and high quality strategic development and will add to the positive momentum in the city. This project is one of a number of significant major developments that will generate employment and stimulus in the months and years ahead. The Capitol cinema development added to One Albert Quay, the Events Centre in the Brewery Quarter, Páirc Uí Chaoimh, Merchants Quay redevelopment, Anderson’s Quay and Sullivan’s Quay will have a combined stimulus effect that Cork city centre has not seen in the past”.

“The Capitol is a pivotal and iconic site in Cork city which has sadly laid dormant for many years. The development has the potential to provide a sizeable boost to job creation with the expected employment of 300 people in construction with jobs for 450 people upon completion.

“Importantly it will also transform Cork’s shopping district and create a space that will deliver a sustainable and exciting innovation and artisan food centre for the region that will promote all that Cork is and has to offer.

“As with most planning projects there will be issues that will need to be ironed out but it is vital that the redevelopment of this key site progresses. It will be the cherry that tops off the 2009 – 2015 development plan that has seen Cork rejuvenated and infinitely enhanced the city for its people and tourists.”

Learn more about the history of the Capitol