Who is Cork’s Carer of the Year? 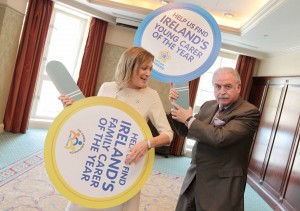 According to the last Census there are over 22,428 family carers in Cork. The Carers Association is asking people across the county to nominate their chosen carer and recognise their work providing essential care in the home to loved ones, who are often frail, have poor health or are children and adults with disabilities.

Broadcasters and patrons of The Carers Association, Mary Kennedy and Marty Whelan, officially launched the awards and will present the Carers of the Year Awards and Young Carers of the Year Awards 2015 at a special ceremony in Dublin in November. The awards, sponsored by Tunstall Emergency Response, are hosted by The Carers Association to celebrate the dedication and commitment of Ireland’s over 187,000 family carers and 6,500 young carers.
Michele Fenton from Midleton was announced as last year’s Cork Carer of the Year 2014. Michele cares full-time for her daughter, Aimee-Louise, who was born in June 2002 with Dysplastic Left/Absent Right Kidney resulting in End Stage Renal Failure. Aimee began her medical care in Our Lady’s Hospital for Sick Children in Crumlin at four days old, which is when Michele began her journey as not only ‘Mammy’ to Aimee but also as a full-time family carer. Aimee-Louise continues to receive regular treatment at Temple Street Children’s Hospital.

“Michele is an inspiration and we were delighted to present her with last year’s award. We are asking people across Cork to nominate their chosen family carers to recognise and celebrate the loving care they provide” said Catherine Cox, Head of Communications, The Carers Association.

Nominations can be made online at www.carersireland.com. Nomination forms are also available from your local Carers Association Resource Centre or by calling the Freephone Careline on 1800 24 07 24. Closing date for entries is Friday September 18th 2015.