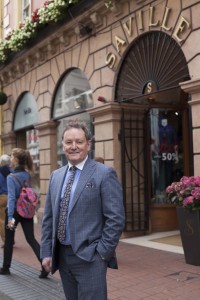 As the only finalist in Ireland, Oliver Plunkett Street hosted two judges from The Academy of Urbanism today to assess whether the street has what it takes to earn the “The Great Street Award 2016”.

Assessing a number of criteria from Leadership, Local Character, Amenity, Commercial Success & Viability and Community and Connectivity among others, the judges spent four hours assessing Oliver Plunkett Street. Having been greeted by Lord Mayor Cllr. Chris O’Leary at City Hall, the judges toured Oliver Plunkett street, talking to traders and learning about the architecture, heritage and commercial hustle and bustle of the street.

Speaking after the adjudication process today, Geoff Haslam, lead assessor for the Academy of Urbanism said, “It’s fair to say that we have been overwhelmed by Oliver Plunkett Street today – if offers everything that we are looking for in a Great Street – and more. We sometimes have to search for the DNA of a street, but Oliver Plunkett Street exudes it – it’s a vibrant living street and community, full of surprises and it is clearly on an upward trajectory.”

Fellow judge, Alastair Barr also noted that the Oliver Plunkett Street was once of the best organised communities that they had seen in the award competition and process. In the six years of judging the awards, the judges said that Cork’s Oliver Plunkett Street had really “raised the bar” for the other two finalists in Liverpool and London.

The Plunkett Street Quarter, which comprises of local traders on the street, has been instrumental in the Great Street Award process. Formed just two years ago, the group has gathered the traders to promote the street and work together as a collective.

“For the last few days, traders have been preparing for the visit of these international judges of the Academy of Urbanism, and today we were all so proud of our Great Street. It was a real joint effort between traders, City Council and the Cork Business Association; the judges really experienced the magic and the community here when they walked down the street in glorious sunshine,” said founding member of the Plunkett Street Quarter, Valerie Finnegan Cahill of IKON Hair Design.

“There was a great effort made by all the traders in the street and we had fun too during the build up. The Great Street Awards process has had a really galvanising effect for the street’s community. Thankfully the judging went exceptionally well today and the judges really were very impressed by Oliver Plunkett Street,” added Clodagh Daly of Daly Opticians, another founding member of the Plunkett Street Quarter.

Lawrence Owens of the Cork Business Association was among the delegation that met with the judges, while showcasing Oliver Plunkett Street. The Cork City Council were heavily involved also with Conservation Officer Pat Ruane, Archaelogist Ciara Brett and City Architect Tony Duggan all providing insights and explanations to the judges on the street.

The judges visited a number of outlets including the microbrewery and restaurant, Elbow Lane, Galligans Fabrics, Minihans Chemist, The Olde Sweet Shoppe, Saville Menswear, Keanes Jewellers, Cronins Menswear, Dalys Opticians and many more on their visit.

Patrick Ledwidge, Director of Services, Cork City Council commented: “The Academy of Urbanism brings together a group involved in the social, cultural, economic, political and physical development of villages, towns and cities across the UK, Ireland and Europe. They recognise the most sustainable and improving urban environments and Cork City Council is absolutely delighted to have Oliver Plunkett Street recognised in this regard. It is marvellous to have the efforts local businesses and residents internationally. This is a street with history and credibility and we look forward to the judging outcome in November.”

The winner of ‘The Great Street Award 2016’ will be announced at the Urbanism Awards Ceremony in London on 6 November 2015.

Meet me Halfway right at the borderline… of West Cork
Previous Post
Who is Cork’s Carer of the Year?