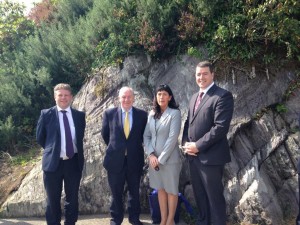 Noel Harrington TD for Cork South West, has welcomed the opening of Bryce House in Garnish Island, Glengarriff, to the public. Minister of State for Tourism and Sport, Michael Ring TD, performed the official opening. Mrs Annan Bryce’s cottage has been restored to its original character by a project funded by Fáilte Ireland and the OPW. The work began in January and was completed in August.

The cottage, which was originally built to the north east of the walled garden in 1912, has been restored to its original Edwardian picturesque style and further works have been undertaken to facilitate visitors by making the cottage universally accessible. Now that the restoration is complete visitors can enjoy the cottage along with the wonderful gardens and picturesque views overlooking Glengarriff Bay.

“I have no doubt that this new asset to the wonderful location that is Garnish Island, with the spectacular Italian Gardens, will attract even more visitors to this unique and new experience. Added to this, it is on the very successful Wild Atlantic Way, which has been a huge benefit economically to the whole of West Cork, as visitors numbers increase each year since its inception in 2013. I, along with Minister Ring, also want to commend all the project team for the remarkable job”.

Garnish Island was occupied from the early nineteenth century by British Government Forces, due to its strategic and defensive position. The forces built a Martello tower, a barrack, battery and a small cottage to strengthen the island’s defences. Mr Annan Bryce bought the island in 1910 and commissioned Harold Ainsworth Peto to design fine gardens and Italian garden buildings. Peto travelled to Italy, Spain and France and collected various architectural stone carvings to display in the gardens.

The Bryce family, as early as 1925, opened the gardens of the House to the public. In 1953 Garnish Island was gifted to the Irish people, following the death of the owner Roland Bryce. The Bryce House was retained for the use of the family, until 1998 when the last occupant passed away.

Garnish Island was well chosen by the Bryce family to establish the wonderful gardens that are enjoyed by all who visit. The designs of Peto and Mackenzie’s continued hard work on developing these exotic grounds have delighted generations of visitors to the island. The Office of Public Works, along with Fáilte Ireland has carefully restored Bryce House so all can enjoy the history and magic of Garnish. This is a crucial role that the OPW plays in the heritage and tourism sector.

“Garnish Island is serviced daily by a number of ferry operators from Glengarriff and is open until October 31st next. It will re-open in 2016 on St. Patrick’s Day” Deputy Harrington concluded.