Shakespeare to be performed in a Cork City Church 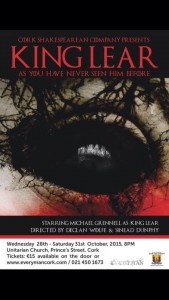 Get thee to the Church in time!

At the end of the month The Cork Shakespearean Company (yes that does exist, see their excellent facebook page) will present King Lear in the Cork Unitarian Church from Wednesday 28th until Saturday 31st October. With a community cast led by professional and critically acclaimed actor, Michael Grennell under the discerning eyes of directors; Declan Wolfe and Sinéad Dunphy, this production is sure to be a stand-out theatre piece this winter.

The tale of King Lear is the story of two families torn apart by lust, greed and the hunger for power. This exciting and imaginative performance brings new interpretation to this classic text, – it’s Lear as you’ve never seen him before. Set in a timeless context, we see Lear divide up his property in three to avoid future strife but through the tragedy of mental illness, political instability and jealousy, the story descends into chaos and strife culminating in its heart-breaking end.

Featuring a new gothic styling of this literary classic with the help of Fiona Ryan and Gill Wild, combined with bespoke music compositions from Seadna McGillycuddy, set in candlelight in Cork’s Unitarian Church, this is more than a production, this is an experience!

Cork Shakespearean Company was first founded in 1924 by Fr. James Christopher (Christy) O’Flynn, in an effort to bring Shakespeare to the people of Cork. Hundreds of actors over the years partook in many of Shakespeare’s works under his guidance, with many going on to pursue professional acting careers. Both Wolfe and Dunphy are keen to continue in the footsteps of this incredible, inspirational figure who worked so tirelessly in many community aspects but in particular in the area of culture and heritage.

With Declan been most known for his stage school, his time with RTÉ’s The Den, and his numerous and much-acclaimed appearances in various pantos and theatre productions, the group are set to benefit from a plethora of experience. While Sinéad will be bringing not only her experience as an actor and director through numerous productions over the years, but also a host of experience in production and event organization which will prove helpful to solidifying the group’s long-standing reputation and work in the community.

Tickets are €15 (which is quite low for any theatrical performance) and will be available on the door but due to limited capacity you are urged to book in advance through the Everyman; www.everymancork.com or 021 450 1673.