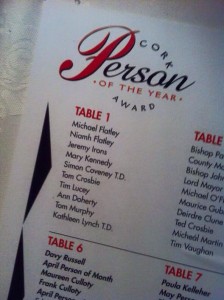 The organisers of the Cork Person of the Year have expressed their sadness on hearing of the death of actress Maureen O’Hara.

The Irish-American hollywood legend attended the awards twice in recent years, as a Person of the Month winner and later as a Guest of Honour.

Awards organiser Manus O’Callaghan told TheCork.ie “She was great fun, feisty and funny, and was not slow to heckle some of our speakers at the awards lunch.”

“She was a great ambassador for Ireland and West Cork around the world” added Mr O’Callaghan.