30 foot dragon on streets of Cork for Halloween 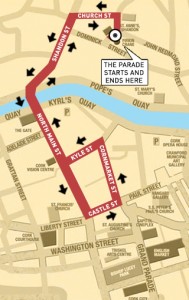 Above: route of dragon procession.

Cork’s Dragon of Shandon Festival will end in a spectacular grand finale on Halloween night (tonight) as a host of ghouls, ghosts and demons emerge from the underworld with the renowned 36 foot dragon in the Dragon of Shandon Parade. Creatures, beasts and costumed performers will thrill crowds on the winding streets of Cork’s historic spine as night falls on the ancient feast of Samhain.

Celebrating its 10th Birthday the Dragon will this year enter the city center extending its route from Shandon along North Main St, Castle St and Corn Market St before returning to the under world again for another year in Shandon’s historic Butter Exchange.

The dragon, made entirely of tape, will make his way through the streets of Shandon with over 300 spooky performers, percussionists and live musicians. The parade is a free family event, and participation is very much welcome! Spectators are encouraged to dress up and join the parade to follow it along its route.

The incredible, monstrous dragon is the centerpiece of a celebration of Samhain that concludes the three-day Dragon of Shandon Festival and brings together performers and participants from a huge variety of communities in Cork. Produced by Cork Community Art Link (CCAL), the parade is a collaboration between groups and clubs as varied as Enable Ireland, Cork City Firebirds Roller Derby, YWI Cork, COPE Foundation, Cork City Samba Band, and the Cork Life Centre – to name but a few.

Th parade, one of the largest night time events of its kind in Ireland, begins at 7:00 pm at the Butter Exchange Building, following a route from Shandon across Noth Gate Bridge around the Coal Quay and back up Shandon Street. For parade map and full details see www.dragonofshandon.com