Rugby star Peter O’Mahony is ‘Cork Person of the Month’

Corkman Peter O’Mahony has received a Cork Person of the Month award to mark his glittering rugby career to date, including his recent performances in the World Cup before his enforced departure through injury.

Peter’s name now also goes forward, for possible selection as Cork Person of the Year, at a Gala Awards Lunch on Jan 15th next, at the Rochestown Park Hotel, Cork.

Peter, a two-time Six Nations winner and Munster captain, has over 30 caps for Ireland. He captained his country at under-18, under-20 and senior level and is now considered one of the top back-row players in the world.

“We are very proud of Peter here in Cork. Locally he has always been recognised as a unique talent, since he first played for Cork Con., and Presentation College in his youth. Skilled, brave, fiercely committed and seen as a future inspirational captain for Ireland, with the same leadership skills as his friend Paul O’Connell” said awards organiser Manus O’Callaghan.

“He has played over 70 times, in many man-of-the-match try scoring performances for Munster, and is now very much one of their talismanic players ” added Mr O’Callaghan. 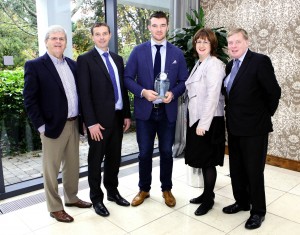