Speaking after the march, Moran said:

“It’s great that so many Cork citizens turned out to demonstrate on a rainy day. And it shows how important this issue is to Cork. We’ve seen how vulnerable Cork is to flooding in recent years, especially for people living in Blackpool, Douglas, the city centre and Mallow.”

Moran continued: “As a country, we’ve become hotter but wetter over the last 50 years as a result of climate change. Scientists say that we’re soon approaching the point where that change will be irreversible.”

The 21st Conference of the Parties (COP21) to the United Nations Framework Convention on Climate Change begins meeting in Paris this week.

The march in Cork was organised as part of a global day of action coinciding with this meeting to demand action on climate change.

“It’s vital that COP21 reaches agreement,” Moran said, “Climate change isn’t just a global issue. It’s a local one too. Cork needs there to be agreement in Paris.” 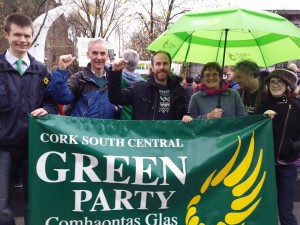