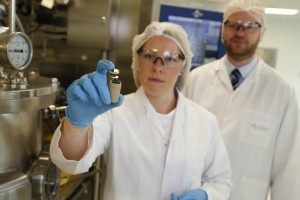 Researchers at Tyndall National Institute in Cork have been working with the European Space Agency (ESA) to develop transistors that can withstand high doses of radiation in space. “Radiation-hard” transistors make it easier for space missions to avoid electronic system failures caused by radiation, so they can function and collect data more effectively. This week, Dr. Matthew Smith from Tyndall National Institute published the results of radiation testing on a new gallium nitride-based transistor, showing it to be far more stable and resistant to the effects of radiation than devices made from conventional semiconductors, such as silicon.

Conventional silicon-based transistors that have been used on previous space missions, such as NASA’s Galileo and Pioneer expeditions, tend to fail when exposed to excessive levels of radiation. The missions collect masses of useful data, but once the spacecraft gets too close to a radiation source, semiconductors in the transistor can lose their ability to be turned on or off and the microchip they are contained in suffer severe degradation. The ESA approached Tyndall to investigate and develop a gallium nitride-based (GaN-based) device which would be stable enough to withstand the radiation present in space. Tyndall took on the challenge of designing, manufacturing, and analysing the performance of the new device, which been successfully tested for its radiation stability in the Netherlands over the past year.

Dr. Matthew Smith, Tyndall researcher, said “Gallium nitride-based devices are very thermally stable, chemically stable and robust – basically everything that could be better than silicon, in terms of space reliability. However, these properties actually make it harder to manipulate the material. For instance, we were quite limited in what acids and solutions we could use to etch its surface. So, our first challenge at Tyndall was to get gallium nitride-based transistors up to performance standard, and we spent a lot of time ironing out kinks in the process. Once the device was complete, it was exposed to high doses of radiation at the ESA’s testing centre to simulate the radiation environment of space.”

The project was led by Professor Peter Parbrook of Tyndall National Institute and Dr. Andrew Barnes of ESA, and it was supported and funded by the Irish Research Council (IRC) and ESA. Dr. Matthew Smith, who was recruited to carry out research and recently awarded his doctorate for his work this project, has just published a paper on the results of the radiation testing in Semiconductor Science and Technology. The design, crystal growth, device application and performance testing were done in-house at Tyndall, before it was sent to ESA for radiation testing. In comparison with silicon-based components, Tyndall’s device shows a high level of stability.

Basically, the device was put in front of a radiation source – a block of cobalt, in this case – and we measured its degradation over time,” said Smith. “The GaN devices we measured proved to be very stable, showing no change over two months at a really high radiation dose. I’m happy to say that it demonstrates this material system is definitely suited to space exploration.”

The first application of the new transistor is likely to be on missions that require operation in harsh environments. One possible candidate could be ESA’s Jupiter Icy Moon Explorer (JUICE) mission to Jupiter, planned for launch in 2022. With the positive impact of more stable transistors, future space missions using GaN technology may be able to avoid electronics failure and successfully collect data to transmit back to Earth.