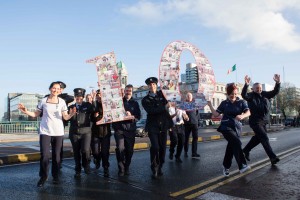 The Cork City Marathon will celebrate a decade of sporting success on Bank Holiday Monday 6 June 2016. In ten years the marathon has grown to be one of the biggest events on the Irish sporting calendar, attracting almost 100,000 runners to participate in the full and half marathon as well as the team relay and youth challenge.

To celebrate 10 years, the Cork City Marathon is calling on all uniformed personnel to participate in the newly launched ‘Battle of the Badges’. The category encourages teams and individuals from the various uniformed bodies, such as the Gardaí, Naval Service, Registered Nurses, Fire Brigade, Ambulance, Coastguard, or anyone in uniform, to run for the honour of their profession.

“In the past ten years the Cork City Marathon has earned a reputation for being inclusive. We encourage individuals of all levels and abilities to get involved – from first timers to professional athletes. This year, to mark our 10 year anniversary, we are encouraging participation – and some healthy competition – among colleagues in uniform,” said Jim O’Donovan, Race Director, Cork City Marathon.

“We want to see as many uniformed services as possible represented in the Irish Examiner Cork City Marathon 2016. It’s all about team spirit, participation and that special sense of achievement. There will be also be awards for the winning individuals and teams” he added.

The 26.2 mile Irish Examiner Cork City Marathon course is internationally recognised, with certification from the International Association of Athletics Federations (IAAF). One of the fastest courses in Ireland, the Cork Marathon has been praised for its inclusivity, with entry fee concessions for those who are unwaged and in receipt of benefit ensuring that young and old and those with varying ability are included in the marathon.

Entry forms and full details on the Cork City Marathon 2016 are available online at www.corkcitymarathon.ie. Early bird entry is available until 31 December 2015.