Fianna Fáil Leader Micheál Martin TD has called on the Taoiseach today in Dáil Éireann to initiate a new scheme with insurance companies here to ensure that homeowners who have been victims of flooding can continue to access affordable house insurance.

#Bandon is flooding, possibly worse than 09 when the town was promised a flood defence system. People are angry. https://t.co/2gl4jtYwQi 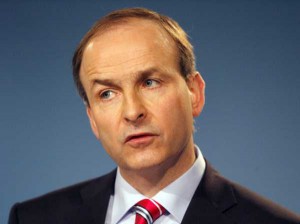 The Fianna Fáil proposal is based on the British Government Memorandum of Understanding with the British Insurance Industry in 2013 which established a not-for-profit scheme to allow flood insurance to remain widely affordable and available. This was implemented into UK law in the Water Act 2014.

Deputy Martin commented, “The scenes emerging from communities under the siege of floods in recent days have been heart breaking. People’s homes and possessions destroyed, and whole communities facing an uncertain future.

“There are a series of serious questions facing policy makers – principally around the continued absence of adequate flood defences and this Government’s €14.5 million underspend on flood relief this year alone.

“But very quickly, another major issue will confront those who today face the horror of clearing out their homes. That is the issue of the availability of flood insurance for their homes. The fact is that the people devastated by flooding face enormous expense and inconvenience, have to try to piece everything back together, but continue to face the risk of further flooding and damage. They either have no insurance or have premiums that are too high.

“These people are our neighbours. They need the Government to intervene and ensure that affordable insurance remains available. The British model, where the Government signed a memorandum of understanding with the insurance companies to establish a not-for-profit scheme that ensures protection remains available for flood risk homes is one that needs to be seriously considered.

“I tried to get a commitment from the Taoiseach today to support this proposal, but none was forthcoming. But Fianna Fáil will continue to highlight this issue and will be bringing forward proposals for further debate in the coming weeks.”