Fianna Fáil has today announced plans for the establishment of a fund administered by the NTMA to hold any further windfall gains from Corporation Tax and other unexpected revenues. Funds would be released to spend on key investment projects should a future downturn arise. Party Leader Micheál Martin has described it as a central plank of the party’s pledge to manage the public finances in a prudent and responsible manner.

The concept is similar to the National Pension Reserve Fund (NPRF) which was set up in 2001. A contribution of 1% of GNP annually was invested in the fund over the period 2001 to 2009, in addition to the proceeds from the sale of Eircom. Former Central Bank Governor Patrick Honohan, described the NPRF as “the most important initiative in economic policy for the past decade”. Michael Somers, the NTMA Chief Executive at the time, added “future generations will thank us” for the foresight of maintaining “a big kitty”.

The NPRF retains very valuable investments, which will help to support economic prosperity and payment of public sector and social welfare pensions in to the future and is currently valued at over €22bn. The State has already made a profit on its holding in Bank of Ireland and the recovery in profitability of AIB indicates the State will make a positive return on this investment as well. 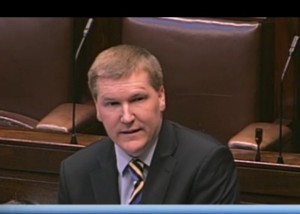 “The National Pension Reserve Fund was very important in cushioning the effect of the worst economic collapse the country ever experienced.

“Ireland is now experiencing very favourable international conditions including a weak euro, record low interest rates, ECB quantitative easing and falling energy prices. It is important, now that the economy is growing with buoyant tax revenues, that we take the opportunity to start putting in place a new rainy day fund as these conditions, which are totally outside our control, will not last forever.

“The funds would then only be drawn on if the unemployment level rose by 1% or was forecast to rise by that level. The money would be specifically used for job intensive infrastructure projects which would cushion the impact of a slowdown in the economy. In this way, it would be different from the original NPRF which was essentially an investment vehicle and made the same annual contribution regardless of the state of the economy. The fund we are proposing would have the advantage of being counter cyclical and smoothing out some of the swings in government revenue.”