Scenes from a major Belgian thriller called Broer (meaning ‘Brother’) were premiered in Bantry House over the weekend. Starring Alison Doody, the film was shot on location in Bantry and West Cork during 2015 and will go on release in Belgium on 20 January. 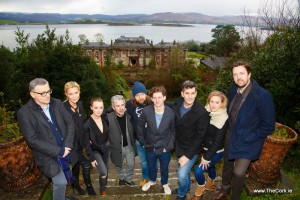 The film features Bantry House, as well as the wonderful scenery of West Cork. Tourism Ireland in Brussels intends to capitalise on the release of Broer later this month. Activity will include a major PR and publicity push to Tourism Ireland’s influential media contacts in Belgium; as well as email marketing and a competition to win a weekend break in West Cork.

TV and film are recognised as strong influencers on travellers everywhere, with up to 35% of people being impacted in their choice of destination by what they see on screen. Tourism Ireland regularly works to maximise the promotional opportunities of popular films and TV programmes filmed on location here.

Danielle Neyts, Tourism Ireland’s manager Belgium, said: “The release of Broer is good news for Irish tourism, as we kick off our 2016 promotional drive in Belgium, bringing the magnificent scenery of West Cork to cinema-goers in Belgium. Tourism Ireland will take every opportunity to capitalise on the publicity around the film, to help whet peoples’ appetites to come and visit this part of Ireland during 2016.”

Produced by Fobic Films, Broer tells the story of a Belgian man who impersonates his deceased brother and travels to Ireland, where an Irish woman, Grace (played by Alison Doody), wants to revive a 20-year-old affair. Grace is extremely wealthy and lives in a mansion (Bantry House).