A Cork City Cllr wants the World Economic Forum in Davos, Switzterland to be cancelled!

The Workers’ Party in Cork have described the opening of the World Economic Forum in Davos, Switzterland as: “the annual outing of world leaders to receive their orders on how to run the world economy from the economic elite of conglomerates, multinationals and the super-rich.” 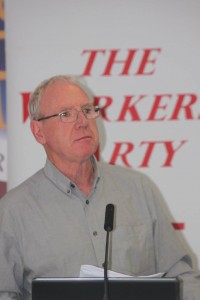 Calling for disestablishment of the forum, Workers’ Party Cork City Councillor Ted Tynan said it was “the most powerful of a number of secretive and semi-secretive bodies which dictate economic, political and social policy to all but a handful of governments – policies which can literally affect the lives of billions of people and sometimes even lead to their deaths through war, starvation or disease.”

“Ireland has no business at the World Economic Forum other than to be told what to do by the very same super-rich people and corporations who caused the economic crash of 2008 and are now driving us towards a second one.”, said Cllr. Tynan.

“The WEF is accountable to nobody, not even the governments who flock to it every year. It comes from the same stable as the even more secretive Bilderbergs and Trilateral commission – billionaires clubs whose sole purpose is to further enrich the 1% who already own most of the worlds wealth. “

The Workers’ Party Cork City Councillor said that it was the decisions made in the next few days at Davos and not the manifestos of the establishment parties in the forthcoming general election which would decide the fate of the Irish economy in the next few years. “Enda Kenny has more interest in the dictates of those he will meet in Davos this week than the views of the voters he will meet at the doorsteps of Ireland during the general election. That’s how powerful and undemocratic the World Economic Forum is”, said Cllr. Tynan.

Cork Airport forced to change name of runway due to shifting magnetic poles!
Previous Post
Thinking of studying Accounting or Finance at college? UCC are offering a taster