Details of the partnership that sees the 16th annual Tour De Munster Charity Cycle once again “share the journey” with Down Syndrome Ireland (DSI) Munster Branches, were announced at Ballyseedy Home and Garden Centre in Tralee, Co. Kerry on Saturday, April 16th, at an event attended by cyclists, friends and families connected to DSI. 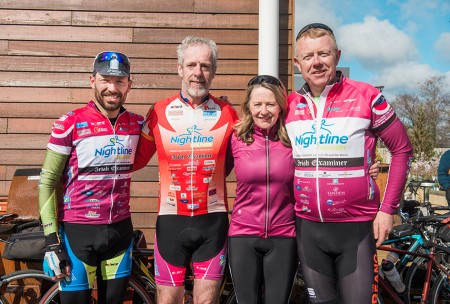 Tour de Munster is an annual four day charity cycle which sees amateur cyclists cycling over 600km around Munster. This is the 7th successive year that the national charity has been the beneficiary of popular charity cycle, which this year takes place from Thursday 4th to Sunday 7th of August.

The 2015 cycle raised €260,000 for the charity, bringing the total raised for the Munster Branches of DSI to €1.6 million. Over the partnership’s history, Tour de Munster has developed close ties and formed lasting friendships with DSI, with many of the charity’s parents and friends participating in the cycle year after year. The aim this year is to raise a further €250,000 for DSI. Entering its 16th year, Tour de Munster is proud to have raised over €2 million for the various beneficiaries since its inception.

Tour de Munster 2016 will see approximately 100 to 120 amateur cyclists travel across all six counties in Munster in just four days in early August, supported by friends, family and the scores of DSI volunteers who will fundraise throughout the route. Each cyclist will cover their own expenses so all funds raised go directly to DSI.

Phil Keohane, Tour de Munster Branch Liaison Officer, and cycle participant, is delighted that DSI has been chosen for the 7th year in a row, saying “The support DSI Munster branches have received through this partnership over the past six years has been phenomenal, and we’re thrilled to be the Tour’s chosen partner once again. Last year’s Tour raised a quarter of a million euro and these funds have made a tremendous difference to the lives of people with Down syndrome in Munster, as well as their friends and families by providing vital services and facilities in each county.”

Phil continued “The goal of DSI is to enable children born with Down syndrome to be as independent as possible, and through the great work of the Tour de Munster cyclists and supporters, DSI can access the funding needed to help more young people with Down syndrome develop and flourish in practical ways.”

Paul Sheridan, who has organised Tour de Munster with tireless dedication and commitment to the chosen charities since day one said “DSI is an extremely worthy beneficiary of the Tour and over the last six years of our partnership we have received a huge amount of support from both the charity and families themselves who benefit from the funds raised. The Tour could not have reached its outstanding results without their help and support. Each time we meet these wonderful children and adults we are reminded of how worthy a cause DSI is. You can’t forget all those cyclists and their own families, who have no direct relationship with DSI, but who put everything they have into the 600km journey around Munster – their dedication doesn’t go unnoticed.”

At the partnership announcement in Ballyseedy Home and Garden Centre, Paul also took the opportunity to thank everyone who has got behind Tour de Munster in the form of vital sponsorship over the last number of years saying “We are very grateful to the many businesses and organisations who have supported Tour de Munster in any way over recent years. We rely on input from these, as well the public, to help us continue to make a real difference for those with Down syndrome and their families. The DSI slogan is “Share the Journey” and a lot of supporters do just that both directly and indirectly.”

Cycling legend, Sean Kelly, who is an avid supporter of Tour de Munster, will once again cycle with the group for the full four days of the Tour. The Irish Examiner, Clare.FM, Tipp FM, RedFM and WLR FM are the Official Media Partners of Tour de Munster 2016.

This year’s Tour de Munster begins on Thursday, August 4th in Waterford City and continues over four days around the six counties of Munster until it reaches Cork on Sunday, August 7th. For route information and the latest news log onto www.tourdemunster.com, find it on Facebook, or follow the Tour on twitter @tourdemunster.