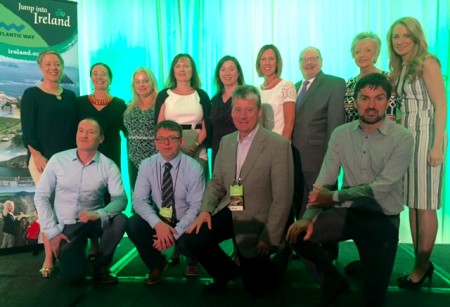 First stop was a ‘Jump into Ireland’ event in Phoenix, where the participating Irish companies had the opportunity to meet, and do business with, some 50 top-producing travel agents, as well as influential travel journalists. Then it was on to Tucson, to take part in this year’s Global Travel Marketplace West (GTM West) – a three-day, appointment-only event targeting key travel professionals from the western states of the US.

Alison Metcalfe, Tourism Ireland’s Head of North America, said: “2015 was another record-breaking year for Irish tourism from the United States and Canada; and the outlook for this year is also positive, with the most recent CSO figures for Q1 showing growth of +24.5% in visitors from North America. We are undertaking an extensive programme of promotions throughout 2016, to keep the momentum going and build on that growth. Our sales blitz and promotions in Arizona provided a really good platform to spread the word about the many great things to see and do right around the island of Ireland.”

Similar ‘Jump into Ireland’ events will take place in Sarasota (Florida), in August; and in San Francisco, Los Angeles (California) and Seattle (Washington), in November.