A new public art work by artist Tom Doig and funded by Cork City Council is to be erected on Cork’s Historic Spine next to Northgate Bridge at 62 Shandon Street. The exciting artwork will be in a pivotal location visible along the River Lee, North Main Street and Shandon Street. This project is an action from the Cork City Centre Action Plan 2016-2017. The location is a four storey, double frontage end of terrace property, built circa 1810, and has a public house occupying the ground floor – The Friary Bar.

The artwork aims to visually celebrate the link between Shandon Street, Shandon and the importance of butter to the life of Cork and its hinterland. Butter was a very important part of Cork’s development as a merchant city trading with the wider Atlantic board and to the Americas. The Shandon Butter Exchange developed in the 1700s was the largest butter market in the world.

This exciting project follows on from the much loved Singer’s Corner project by artist Johnny Bugler / Cork Printmakers erected in 2014 as the first “Historic Spine public art corridor”, which was a partnership between the City Council, the Public Area Enhancement Scheme, and the building owner. Similarly the Flags of the Townland project is a partnership project between the building owner, Cork City Council and the artist. The drivers of the project have been the Planning Policy Section with support from the Arts Office and Law. 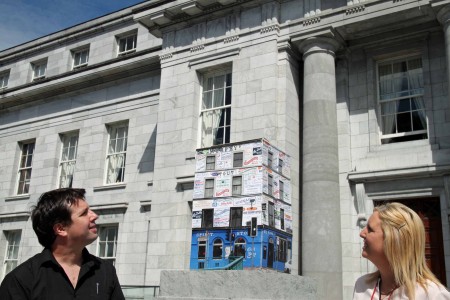 The Artist, Tom Doig, refers to the series of butter wrappers as ‘having an immediate visual impact, evoking in many visitors to Cork an association, not just with the butter trade and the concept of co-operatives, but with a strong sense of place and time. The bright colourful designs proudly display the names of the townlands, and villages which produced the butter, representing a way of life, a shared heritage. The initial proposal was to create stencilled reproductions of the labels in the Shandon area, but was expanded into a proposal to wrap an entire building with the designs instead, folding them around architectural details and corners. Wrapping a building in printed paper like the traditional method for packaging butter is not such a stretch of the imagination. While Munster’s ‘butter roads’ trace a physical route from the outlying areas of butter production to the butter market at the heart of Cork’s historical trade areas, the prominent display of these wrappers in an urban setting could be said to evoke in the minds of many Corkonians a link between modern urban life and a shared rural past.’

Spokesperson for the Planning Policy section of Cork City Council and Project Officer for this undertaking is Helen O’ Sullivan ‘ As with Singer’s Corner, Flags of the Townlands will be a temporary work of public art and will be taken down in late 2017. This is to ensure that the work is erected only while it is in a good condition and doesn’t deteriorate in the public domain having an adverse impact on its context and the reputation of the artist and Cork City Council. Scaffolding is today being erected in order to carry out the necessary advance repair works to the facade of the property and when this is complete, the Artist’s team will move in to begin the task of erecting this large wrap around butter wrapper to the four storey building and then LED lighting will be installed to gently illuminate it at night. It is anticipated this will take no more than 4 weeks to complete before its un-veiling’

With two Public Art projects in the City at Shandon Street and Washington Street end located outside and accessible to all in the public realm, Cork City Council hopes to show that it appreciates the importance of Public Art in a public domain and the impact it has on its viewing audience.