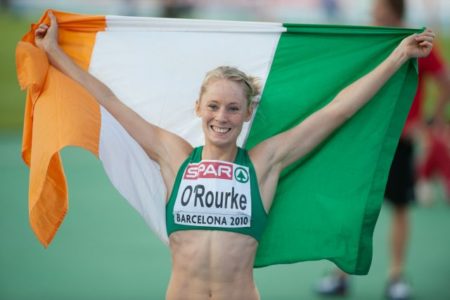 A Dingle based gym instructor is set to run 24 marathons in 24 days to raise €100,000 for people in Ireland who live with Spina Bifida and/or Hydrocephalus.

Following on from his ’12 Marathons, 12 Days’ in 2014, when Shane Finn raised €36,000 for Spina Bifida Hydrocephalus Ireland (SBHI), the unstoppable Kerry man is now back with double the distance – a total of 628.8 miles – to conquer!

24-year-old Shane will set off from Donegal on 22nd June and make his way through 24 counties as he covers a marathon a day for 24 days, ending in his home town of Dingle on Sunday, 15th July.

In training for this extraordinary challenge over the last number of months, Shane’s 24 marathon campaign has attracted support from one of Ireland’s most successful track and field athletes, Derval O’Rourke.

‘I’m really excited to support Shane on his mission to complete 24 marathons in 24 days. I chatted to Shane a few months ago and was so inspired by his motivation to raise money and awareness for SBHI,’ says Derval.

‘He has taken his personal experience with his cousin Mary and used that to really make a difference in the lives of people living with Spina Bifida and Hydrocephalus.

‘I love the idea of 24 marathons in 24 days and think it’s an amazing goal. Whilst most of us can only dream of such feats, we can all help in our own way with this great cause.

‘I’m excited to support Shane on his journey and I hope lots of people will join me in supporting him,’ urges Derval.

With an ambitious fundraising target of €100,000, Shane’s motivation for 24 Marathons, 24 Days is his cousin Mary Evans. Living in Celbridge in Co. Kildare, 35-year-old Mary, like thousands of other people in Ireland, lives with two conditions, Spina Bifida and Hydrocephalus.

‘When thinking about what I could do to follow on from 12 Marathons, 12 Days, I imagined how many people could be helped if I raised €100,000,’ explains Shane.

‘I came up with the number 24 not because it is double of 12, or because I turned 24, but because there are 24 hours in a day and 24 hours a day can often be difficult for someone with Spina Bifida and their families.

‘We complain about small things like being tired or being sore and not having the things we want, but our daily problems and complaints are insignificant when compared with the challenge faced by lots of people living with these conditions. When I visit my cousin Mary, I am aware that for her, it is every day that she lives with Spina Bifida.”

SBHI is the national organisation which works to ensure that every person living with one or both conditions, including Mary, is given the best opportunities to fulfil their true potential.

Supporting more than 2,000 people who know Spina Bifida and/or Hydrocephalus to be a reality in their lives, the staff and volunteers at SBHI work to increase awareness about Spina Bifida and Hydrocephalus, as well as the essential funds which ensure that this unique service can be sustained.

The charity is fortunate to have people, such as Shane, who are willing to get involved in fundraising on such a scale. However, to make a fundraising event of this size a success requires investment. The aim, in backing SBHI’s ‘Marathon Man’ Shane is to recruit as much awareness, sponsorship, and support as possible.

‘We would love to welcome as many people as possible on board through this epic 24 Marathons, 24 Days challenge!

‘You could come on board as one of our 24 Corporate Sponsors: we will have one lead sponsor each day of the 24 marathon days. We also need, either through direct provision or sponsorship, accommodation, food and drink, vehicles, equipment, merchandise, and printing.

‘Whether you feel you are a potential volunteer, donor, sponsor, or cheerleader, you can be involved to help make this event a real success.”

You can find out more information about this Kerry man’s incredible undertaking, and donate on www.24marathons24days.ie