Topaz has announced Lisa Harte from Carrigohane is the January 2017 winner of Topaz ‘PLAY or PARK’ competition.

After choosing to ‘play her points’ at her local O’Reilly’s Topaz in Carrigrohane, Lisa will now drive away in a brand new SEAT Ateca SUV, worth €26,450. 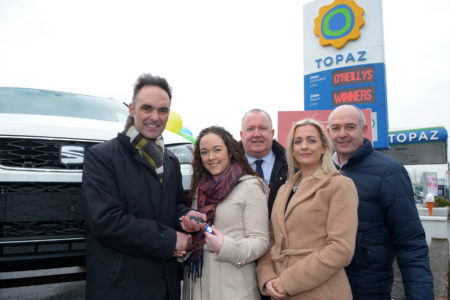 Commenting on her win: “I couldn’t believe it when I got the call that I had won. Just recently I started taking driving lessons but since hearing the news I’m more motivated than ever to get myself into gear and pass my driver’s license test. I can’t wait to take the wheel and practice my driving at every opportunity. I think my husband, Emmet, is delighted that he won’t have to drive me around for much longer!”

Paul Guy, Head of Loyalty at Topaz, said: “I am delighted to be here today to congratulate Lisa Harte on her Play or Park win. It’s an incredible prize and Lisa couldn’t be more excited about collecting the keys and driving away in her brand new SEAT Ateca. To be in with a chance of winning just like Lisa, don’t forget to play your points next month!’

Neil Dalton, Head of Marketing and Product at SEAT, added: “Everybody at SEAT is really excited to be handing the all-new SEAT Ateca SUV over to Lisa, who is clearly delighted to be the January winner of Topaz PLAY or PARK. We know the car is in good hands and we wish Lisa the best of luck with her driving test – we’re confident she’ll pass with flying colours!”

Over 472,000 customers across the Topaz network have participated in PLAY or PARK to date, collecting points with every purchase at participating forecourts nationwide. Topaz customers won’t want to take a back seat when it comes to playing their points in 2017, with prizes up for grabs including the brand new SEAT Leon and SEAT Ibiza. At the end of this month, Topaz will be awarding one loyal customer the prize of a lifetime – the chance to become an astronaut for the day at the Kennedy Space Centre in Orlando, Florida.