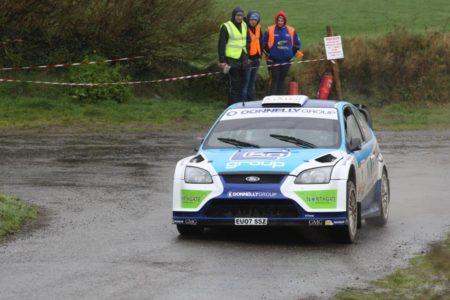 Donagh Kelly’s domination of the Quality Hotel Clonakilty West Cork Rally continued when he brought his Ford Focus WRC to victory for the fourth successive year. His winning margin of 1 minute and 45 seconds looked comfortable by the finish, but it was only on the Sunday stages that he eventually opened up a sizeable gap helped also by some of his closest challengers hitting problems on the closing stages. Josh Moffett & James Fulton were second overall in their Fiesta R5 and took maximum Tarmac Championship Points while Alastair Fisher & Gordon Noble in a similar car finished third overall. The two fastest R5 drivers over the weekend were Sam Moffett & Robert Barrable but both suffered time consuming punctures on the final loop of the rally with the latter being forced out with a cracked brake disk.

Introduction
The rally was based in the Quality Hotel Clonakilty as usual and Greg McCarthy was Clerk of the Course for the third year and the rally was the second round of the Clonakilty Blackpudding Irish Tarmac Championship, and the opening round of both the FIA Celtic Trophy and the PlasticBags.ie Southern 4 Rally Championship. 133 cars lined up to start the rally in the main field which had a lot of quality right down through the entry list. Top seeds of course were Donagh Kelly & Conor Foley in their Focus WRC, with Alastair Fisher & Gordon Noble at 2 in a Fiesta R5. The Moffett siblings were at three and four with Sam starting ahead of Josh, while a lot of eyes were focused on the new Hyundai i20 R5 being driven by Robert Barrable at five. Stephen Wright and Arthur Kierans were at six in another Fiesta R5 while the Irish / Welsh pairing of Kevin Kelleher & Gwynfor Jones came in at 7 in a Subaru Impreza S14 WRC. Joe McGonigle & Ciaran Geaney had their beautiful Maxol liveried Skoda Fabia R5 at number eight while the top ten was rounded off by Aaron McHale / Darragh Kelly (Citroen DS3 R5) and Brendan Cumiskey / Ronan O’Kane (Skoda Fabia R5).

Outside of the top ten a very strong modified entry had assembled with Brian Brogan & Damien McGettigan seeded at 11 in an Escort leading the way. Other drivers in the top twenty included Gary Kiernan, Adrian Hetherington, Damien Tourish, Wesley Patterson, Andy Mahon & Frank Kelly all in Escorts, while Kevin Eves (Corolla), Eugene Meegan (BMW) and David Guest (Mitsubishi Lancer) completed a strong line up in the top end of the field.

Day 1
Unlike previous years the weather wasn’t as fine starting the rally with misty rain falling in the town of Clonakilty and also on the first part of the Ring stage. By the midpoint of the opening stage at Ring the roads had dried out but the wind was very strong which insured that the second stage at Dunworley which also hugged the coast was bone dry. The opening stage saw Kelly take fastest but the biggest surprise was the pace of Barrable in the Hyundai who was only 0.4 seconds behind. Sam Moffett was only another 0.3 seconds back as the pace was searing from the start. The second stage saw Kelly still lead but Sam Moffett was still hanging on just under two seconds behind. Remarkably there were no retirements from the top twenty over the opening two stages despite the high speeds.
Stages three and four were then repeated and although mostly dry there were some slippy patches that gave a lot of drivers anxious moments as the mist crept in from the sea occasionally. Kevin Kelleher retired his Impreza when first of all a turbo blew and when there was still a chronic lack of power out of junctions he decided to call it a day. Frank Kelly broke a differential on Stage 3 and was also side-lined. Local drivers forced to retire on the opening stages included Damien McCarthy (Clutch), Brian O’Mahony (Half Shaft) and Patrick Calnan (Engine). By the end of stage four Kelly’s lead was just 3.5 seconds from Sam Moffett with Barrable a further 18 seconds back. Alastair Fisher was struggling to match the pace of his peers and was back in fifth place behind Josh Moffett. William Mavitty also had mechanical problems on stage four and lost a large amount of time.

The next four stages were Ardfield and Hayes Cross to be repeated and Kelly began to eke out more of a lead which had crept to 14 seconds at the end of stage 6. Aaron McHale suffered a rear puncture on stage 6 which cost him a place in the top ten and Damien Tourish retired his Escort after hitting a bank on Stage 6 which was very difficult for all crews due to a heavy mist descending on the area. Positions remained much the same as the crews headed to the challenging night stage at Sam’s Cross where fog was going to test the bravery of the drivers. Kelly took fastest time to open up a 31 second lead overnight from Sam Moffett with Barrable, Josh Moffett, Fisher and Stephen Wright completing the top six. Kevin Eves was stunningly quick on the night stage to open up a lead of 23 seconds over Gary Kiernan overnight with Brian Brogan back in third place. In the Historic Rally, Barry Jones held a 43 second lead overnight in his Escort from the similar car of Ernie Graham and Owen Murphy was third in his Avenger.
Day 2
If conditions on the first day were bad, the second day was much more challenging with strong winds and persistent rain over the three stages at Clogagh, Ballinascarthy & Rossmore. Sam Moffett posted a time three seconds faster than Kelly to close the gap to 28 seconds with five stages to go. However that brought Kelly to life and he posted a stunning time on Ballinascarthy taking 12 seconds from his rivals to stretch his lead to over 40 seconds as the rain continued to fall. By the end of the loop Kelly was looking at a fourth win in a row with his advantage almost a minute and his rivals began to struggle.

The National Rally saw Brian Brogan and Adrian Hetherington bow out with mechanical problems as Kevin Eves who was suffering a stomach bug was being reeled in relentlessly by Gary Kiernan. This battle was ended with a couple of stages to go when Kiernan’s engine expired and left Eves with a huge gap of over three minutes back to the Darrian of Kevin Gallagher. Out in front three of the front runners were about to hit trouble on the second run over Clogagh. Both Sam Moffett & Robert Barrable got punctures and in the latter’s case also a broken brake disk forcing his retirement just before the penultimate stage. Stephen Wright was also in trouble and had to retire while Joe McGonigle had a spin as the Tarmac Championship leader board was thrown upside down.

Kelly stayed out of trouble to record his fourth victory while Josh Moffett was a delighted second place ahead of Alastair Fisher to complete the podium finishers. Sam Moffett was a very disappointed fourth after taking three fastest stage times over the weekend and a performance that deserved better luck. Fifth went to Joe McGonigle getting his best result in West Cork to date while Tomas Davies had a fine result to take sixth overall in his Fiesta R5. Brendan Cumiskey was a steady seventh overall ahead of Aaron McHale who climbed his way back into the top ten after his first day time loss. Padraic Duffy and David Guest completed the top ten with the latter also taking Group N honours.

Kevin Eves won the National Rally from Kevin Gallagher, while Eugene Meegan overcame numerous niggling problems to take third overall. The top five were completed by Cork drivers with Vincent McSweeney taking fourth overall in his Honda Civic and Ray O’Sullivan finishing fifth in his Escort. Barry Jones & Iwan Griffith won the Historic Rally after an event long battle with Ernie & Will Graham. Owen Murphy, Shawn Rayner and Todd Falvey completed the top five places. The Junior Rally was won by Kieran Reen and Andrew Cronin from Kerry in a Honda Civic. Over the six stages there were a remarkable four leaders in this category with John McCabe ahead after the opening stage before retiring, and then Eric Calnan led only to retire on the next stage. Aaron O’ Regan led for two stages and then retired leaving Kieran Reen out in front to win by almost a minute from Mark O’Leary with Eamonn McCarthy third overall.