Fourteen Irish tourism companies, including the The Kingsley Hotel, have joined Tourism Ireland at the British Tourism and Travel Show this week, at the NEC in Birmingham.

The British Tourism and Travel Show is an annual event for the travel trade in Britain – attracting nearly 3,000 coach tour operators and group travel organisers, including leading travel companies like British Airways Holidays, Coachholidays.com and JacTravel.

The two-day event provides a valuable opportunity for the participating companies from Ireland to meet, and do business with, key players in the British travel trade – encouraging them to introduce Ireland into their programmes for 2017 and beyond, or to extend the programmes in which Ireland already features. 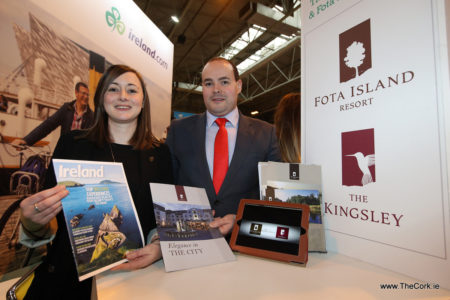 Julie Wakley, Tourism Ireland’s Deputy Head of Great Britain, said: “Great Britain is the largest market for tourism to Ireland and we were pleased to see visitor numbers increase by +11% in 2016, an extra 377,200 British visitors compared with 2015. Our presence at this year’s British Tourism and Travel Show is just one element of Tourism Ireland’s programme of activity with the travel trade. Our aim is to enthuse the British travel trade, including online and traditional travel agents and tour operators, so they feature more Cork and Ireland holidays in their programmes for 2017.”

Last week, Tourism Ireland participated in and promoted the island of Ireland at a range of St Patrick’s Day events across Britain. Major landmarks participating in Tourism Ireland’s Global Greening initiative to celebrate St Patrick and Ireland included the London Eye, Nelson’s Column, Selfridges in London and Birmingham, the Trafford Centre in Manchester and Gateshead Millennium Bridge. For the first time ever, the Heron Tower and City Hall in London, Bicester shopping outlet and The Kelpies in Scotland participated in the initiative.