Printer ink cartridge recycling scheme has raised more than €100,000 for Munster charities since 2011

What started as an effort to raise a few thousand euro; to say thank you to the staff of St. Therese’s Oncology Ward at the Mercy University Hospital for the wonderful care and attention given to Denis O’Donovan’s wife Angela after she was successfully treated there for a Non-Hodgkins Lymphoma; over the next five years took on a life of its own, and to date over €100,000 has been raised for a number of Munster charities close to the heart of the O’Donovan family from Blarney, Co. Cork, through their Recycling Appeal.

Sadly, Angela passed away in 2013, but her legacy lives on in the wonderful work Denis and his son John do through the Recycling Appeal which has been in operation since mid-2011. Through the appeal over one million used printer laser and ink cartridges have been saved from landfill, so the benefits are twofold.

The campaign is run in conjunction with HP and the simple, yet very effective initiative sees Denis and John deliver boxes to registered companies around Munster, who fill them with empty cartridges, which are then collected free of charge by the duo.

To date, over €66,000 has been raised for the Mercy Cancer Appeal, with funds specifically going toward the building of the Mercy Cancer CARE Centre. The Mercy Hospital Foundation is building this specialised Cancer CARE Centre next to the Hospital to provide a quiet, safe place for patients and families to help them deal with their cancer diagnosis or to receive ongoing support during their cancer journey through one-to-one support, peer-group sessions and bereavement counselling in a nonclinical and relaxed environment. 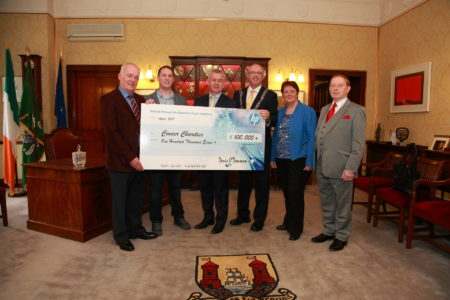 There are a number of other beneficiaries of the scheme, with Denis also lending his support to the tune of over €30,000 to the St. Mary’s Dominican Church Renovation Fund; the Kerry Cancer Support Group which runs the Kerry Cork Health Link Bus; Recovery Haven Tralee; Kerry Hospice; South Infirmary Victoria University Hospital.

The announcement that the Recycling Appeal has raised over€100,000 was made at a special reception in The Lord Mayor’s office at City Hall Cork on April 4th. In attendance were members from the O’Donovan family; Les O’Reilly from HP; some of the registered companies including Veolia and Novartis; Chief Superintendent at An Garda Síochána, Barry McPolin; and some of the beneficiaries including representatives from the Mercy Hospital Foundation; South Infirmary Victoria University Hospital; and Fr Gerard, Prior of St. Mary’s Dominican Church.

Speaking about the campaign, Denis O’Donovan said “We started this successful campaign because my family had first-hand experience of the incredible care and attention received by cancer patients at the Mercy and we wanted to give something back, something that would make a real difference.”

He continued “The absolutely fantastic support and reception we have received from businesses across Munster who go out of their way to keep the cartridges is unbelievable, and I want to thank them for their support to date. I would urge more companies to come on board – it’s a completely free service, we take away your empty printer cartridges which helps you, and you are raising much needed funds, which helps the Mercy and our other beneficiaries!”

This year the HP Planet Partner program celebrates 25 years making a difference protecting the planet and diverting waste from landfill. Speaking at the reception at City Hall, Les O’Reilly, Print Specialist at HP commended Denis saying “I have high praise for Denis O’Donovan and his team who have voluntarily collected 1000s of HP Laser print and ink cartridges in Munster and surrounding areas over the past number of years. He is a passionate volunteer raising much needed funds supporting local worthy causes, and HP are delighted to support Denis and his recycling team.”

Over 25,000 premises in Cork will have high speed broadband by 2018
Previous Post
Bandon to become latest Age-Friendly town in the county – Murphy O’Mahony