The Irish Cancer Society’s annual Daffodil Day fundraising event was held on Friday 24th March, 2017 and the public came out in force to support the cause. Cork city was awash with colour, with yellow being the order of the day. Volunteers who are the mainstay of the Society, without whom many of its events simply could not operate, were out in force collecting for the charity with many people coming into the city to procure their favourite items of merchandise such as tea towels and teddy bears. The sun was shining brightly all day coupled with the sea of yellow daffodils making everyone smile.

Daffodil Day, the flagship fundraising day of the Irish Cancer Society helps cancer patients at every stage of their cancer journey and public support is vital in raising the much needed funds. Daffodil Day is vital in supporting cancer patients nationwide with over 40,000 people now diagnosed with cancer in Ireland. Many of its services including Night Nursing operate 365 days a year. Dr. Robert O’ Connor, Head of Research with the Society was also in attendance.

Members of the Cork City Fire Brigade service were on Patrick Street collecting on behalf of the Society and as always generated a lot of fun and excitement. The firemen weighed in behind the charity in transporting the stock required to the various sales locations for the day. They also had fire tenders on Patrick Street where the fireman also had a collection area. 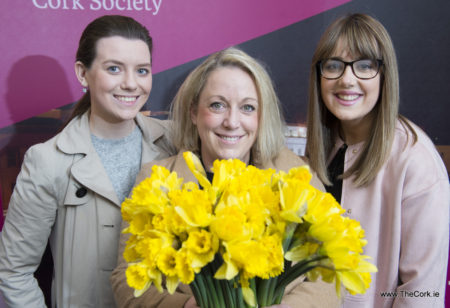 Cork City Lord Mayor Des Cahill was in attendance and thanked the people of Cork for their most generous support of the Society. He outlined that every contribution is appreciated by the Irish Cancer Society who provide such important services for cancer patients and without whom the Society simply could not continue to function. 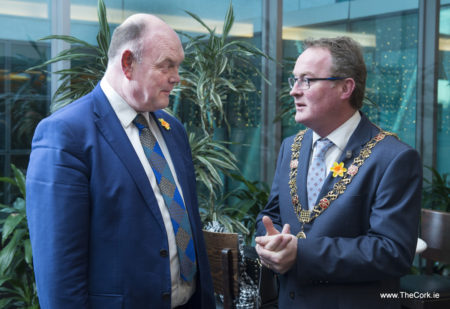 Many Cork City centre businesses also supported Daffodil Day by holding their own events such as coffee mornings and fundraisers. Others provided free coffees to volunteers on the day and many other services required for the event. The public also donated bunches of daffodils which were sold on the day.

Mary O’ Sullivan, Chair of Cork City Daffodil Day Committee said: ”The people of Cork have proved their generosity once again and have come out in force to support us. Our marvellous volunteers have continued to row in behind the event and have done trojan work both prior to and on the day to make the event a success. Even one hour spent volunteering and every bunch of daffodils or pin sold can make such a difference to the lives of cancer patients. One in three of us in Ireland will be diagnosed with cancer during our lifetime, so Daffodil Day is a fundraising day for every family in Ireland.”