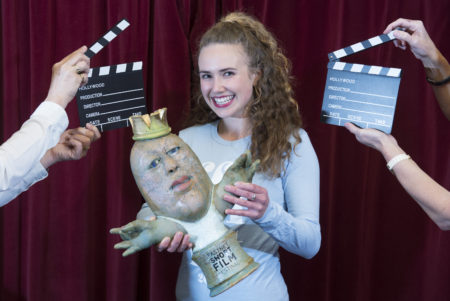 Kate Barry from Barry & Fitzwilliam pictured at Launch of The Fastnet Film Festival , which will take place in Schull, West Cork from Wednesday the 24th to Sunday 28th May. It was launched at the ‘Cinematographer’s Party’ at The Crane Lane Theatre, Cork.
Photography by Gerard McCarthy

Fastnet Film Festival, discloses guest list for May 2017 at the Cinematrographers’ Party

The festival, which will take place in Schull, West Cork from Wednesday the 24th – to Sunday 28th May, was launched last night (25rd April) at the ‘Cinematographer’s Party’ at The Crane Lane Theatre, Cork.

Guests could not believe that Academy Award winning film historian Kevin Brownlow, would screen the Premiere of the 1925 restored silent film, The Goose Woman which will be accompanied by world famous composer and conductor Carl Davis on grand piano. This unique event is only possible thanks to the support of Cork County Council. Carl will also host an illustrated talk on his work, including screened excerpts from the restored Chaplin films.

Further exciting news announced included the planned Crashlands, live performance by Crash Ensemble at sundown on Long Island. To mark their 20th anniversary at the cutting edge of contemporary classical music, Crash Ensemble present a ground breaking new music project. This ambitious collaboration commissions and showcases new work from 20 Irish and international composers. A live performance of some of these pieces will be premiered on the West Pier on Long Island Schull. Crash Ensemble is Ireland’s foremost contemporary music ensemble; a group of world-class musicians who play the most adventurous, ground-breaking new music of today.

Other names announced were David Puttnam, Jim Sheridan, Lenny Abrahamson and Stephen Frears. The line up this year is unprecedented with over 70 expert guests taking part.

Also, featured at the festival will be in excess of 400 screenings, Local Interest Films, World Cinema Programmes to include contributions for from Scotland, Poland, Germany, India, Sardinia, and Portugal.

The Fastnet Film Festival is a major showcase for Irish and International short film production, focusing on the craft of film and has been held in high regard on a local, national and international level for several years now. The Festival this year will run a series of Seminars, Masterclasses and Workshops covering, Lighting, Screenwriting, Casting, Auditioning, Score Composition, Film Ethics, Filming Conflict, Animation, Creating Content on Your Mobile, Set Design, Shorts to Feature and Costume.

“The 9th Fastnet Film Festival would not be possible without the support of our sponsors William and Judith Bollinger, RTE Supporting the Arts, Fáilte Ireland, The Arts Council, Benny & Cliona McCabe, The Irish Film Board, Screen Training Ireland, The Sunday Times,Turkish Airlines, Viv Nathan, Frank Daly, Michael Satke, Cork County Council, Ken Kilkenny, Denis and Mary Ryan and Peter and Sabine Kelly, and huge private support from friends and local businesses. A big thank you goes out to the village of Schull for providing an idyllic setting for what is now an internationally acclaimed Film Festival and for the outstanding encouragement and enthusiasm of the entire community toward this event.

Once the launch event was underway last evening, several clips of short films in competition were screened to give as a prequel to this year’s festival, along with live music from the PC Quartet and dancing till late. All in all, a wonderful way to herald what will prove to be an intriguing and innovative Festival over the final weekend in May 2017. Do not miss it!