EAST CORK: Tribute to the Choctaw Nation to be recognised at Official Dedication on Sunday, June 18th 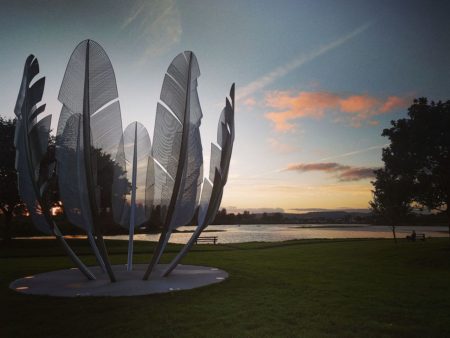 Native American Choctaw and Irish cultures will come together on Sunday, June 18th for the Official Dedication of the ‘Kindred Spirits’ sculpture in Midleton, Co. Cork, which commemorates a donation made by the Choctaw people to Ireland during the Great Famine.

The chief of the Choctaw Nation, Chief Gary Batton and a delegation of over 15 representatives from the Choctaw Nation from Oklahoma will attend the public ceremony at 2pm at Bailick Park that will include traditional Choctaw and Irish music and dancing, as well as several activities around the sculpture and the story.

‘Kindred Spirits’, by Cork based sculptor Alex Pentek, was commissioned in 2013 by the former Midleton Town Council to commemorate the time in 1847, when the kind people of the Choctaw Nation of Oklahoma heard of the suffering of the starving Irish. They responded, with greatness of spirit and generosity, by contributing a sum of $170 dollars (about $4,400 today), to send food aid to Ireland. This show of solidarity came despite the great hardships being faced by the Choctaw people themselves who were also living in conditions of starvation and poverty, and who had just a few years previous endured the Trail of Tears.

The sculpture comprising of nine, majestic 20 foot eagle feathers reaching towards the sky in the East Cork town, arranged in a circular shape, represents a bowl filled with food, presented to those suffering hunger, metaphorically speaking.

Speaking ahead of the Official Dedication, Joe McCarthy, East Cork Municipal District Officer, said “The Choctaw people were still recovering from their own injustice, and they put their hands in their pockets and they helped strangers. It’s rare to see such generosity. It had to be acknowledged.

“They bestowed a blessing not only on the starving Irish men, women and children, but also on humanity. The gift from the Choctaw people was a demonstration of love, and I hope that this monument and the Official Dedication on June 18th acknowledges that, and that it will encourage the Irish people to act as the Choctaw people did.”

Ahead of their upcoming visit to Ireland, Chief Gary Batton spoke about the connection between his people and the Irish: “Your story is our story. We didn’t have any income. This was money pulled from our pockets. We had gone through the biggest tragedy that we could endure, and saw what was happening in Ireland and just felt compelled to help.

“The bond between our nations has strengthened over the years. We are blessed to have the opportunity to share our cultures, and meet the generous people who have continued to honour a gift from the heart.”

This is not the first time the Choctaw Nation has been honoured in Ireland. In 1990, Choctaw leaders travelled to Mayo to take part in a re-enactment of an 1848 protest. The gesture was returned in 1992, when Irish leaders took part in a trek from Oklahoma to Mississippi. Former Irish President Mary Robinson also has been named an honorary Choctaw chief.

‘Kindred Spirits’ was one of a number of projects approved by Midleton Town Council in 2013 for the commissioning of public sculptures and the promotion of history, heritage and tourism in the town. Commenting on this Joe McCarthy said “In considering the provision of public sculptures, the Council wished to include reference to and acknowledgement of matters of local, national and international association and interest through subjects which would have wide appeal, appreciation and attraction.”

The ‘Kindred Spirits’ Official Dedication starts at 2pm on Sunday, June 18th, and everyone is welcome to attend the special ceremony at the sculpture on Bailick Road in Midleton.