FORMER MOTHER AND BABY HOME: Bessborough site should be donated to Cork City or to the State – says Cork City Cllr 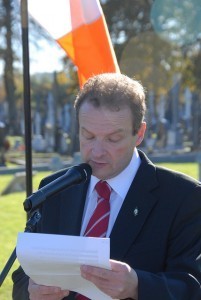 Sinn Féin Cork City Councillor Chris O’Leary has said that Bessborough should be donated to the City of Cork or to the state.

He stated that the considerable state funding received by Bessborough means that there is a social obligation for the Sisters of the Scared Hearts of Jesus and Mary to help ensure the retention of vital community services.

Councillor O’Leary, who was Lord Mayor of Cork 2015/2016, also said that he will be seeking support from all Councillors in the Cork City South East Ward for letter to the Sisters of the Sacred Hearts of Jesus and Mary urging them to consider such a move.

“The services provided at Bessborough are absolutely vital for the social well-being of the citizens of Cork City. It is simple – we cannot afford to lose these services because vulnerable families depend so much on them.

“The Bessborough operation is a critical piece of social infrastructure for Cork City. It would be disastrous to see the second chance education programme, the creche and the employment services wound-up because of the intended sale. The affects in the community would be felt for years. The loss of jobs will be a hard blow for the workers to take. We are talking about the loss of forty jobs as a result this sale.

“The reality is that Bessborough has received substantial state funding over the years. This has amounted to over €30 million. Bessborough receives yearly funding of €3.4m. Of this, 45% comes from the Child and Family Agency and 20% comes from the Department of Social Protection.

“Therefore, there must be a social dividend for citizens. There is both a social and moral responsibility for the services to be retained and to be not discarded for the sake of profit. The Sisters of the Sacred Hearts of Jesus and Mary has an obligation to help ensure that this does not happen.

“I think it is very cheeky of the Order to take State handouts and attempt to close down the services, developed with State aid.

“The community is not going to get anything out of it.”

“The retention of the services provided at Bessborough is critically important to Cork City. It would be good if a cross party grouping of councillors from this ward came together to emphasise that fact directly with the Order.”

Mr O Leary added that a request to meet with the Order would be included in the letter.