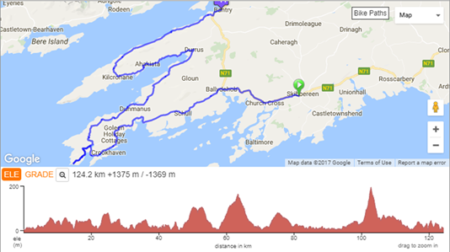 Cork is gearing up to host stage two of the unique 17-stage cycling event.

The Cycle Sportif covers over 2,000km of the Wild Atlantic route winding through the coastlines of nine counties from Co Cork to Co Donegal from the 13th to 29th September 2017. Cyclists can register for any stage up to the day before.

On Thursday 14th September, the second stage will see cyclists depart from Skibbereen covering 124K and finishing in Bantry. A core element of the Wild Atlantic Way Cycle Sportif is how the spectacular coastline scenery combines with the local culture in each of the communities to deliver a unique experience and welcome for the cyclists, with the chance for participants to immerse themselves in the towns along the route.

Along the way, riders will take in the picturesque towns and villages of Ballydehob, Schull, Goleen and Barleycove, with its sandy Blue Flag beaches stretching across the horizon. From Mizen Head, the riders journey up the northern flank of the headland. Then it’s onward to Kilcrohane the challenging 2km Sheep’s Head climb, with an 11% final elevation, awaits. Catching their breath just before the summit at Finn MacCool’s seat is a must, before beginning the long, steep descent into Bantry with fabulous views across Bantry Bay towards the Beara Peninsula.

The Wild Atlantic Way Cycle Sportif is a fully supported event, with participation open to leisure cyclists, amateurs and those who simply want to challenge themselves to an epic adventure, on one of the longest and most spectacular touring routes in the world.

Michael O’Boyle, Tour Director at Ride Wild commented, “This event is like no other on the Irish cycling calendar and will deliver widespread appeal to people with a passion for cycling, and for the Wild Atlantic Way. We’re confident that this multi stage Sportif will attract a lot of interest this year, further building in 2018 and beyond. We have had great feedback from the cycling community along the route, and I’m sure our cyclists will receive a warm welcome as they enjoy this wonderful cycling experience on the Wild Atlantic Way.”

Local communities along the route will play a major role in the spring and summer events in 2018 and beyond with a range of initiatives planned, to include the chance for each host town along the route to nominate a local ambassador who they feel represents the best of their local community to act as the official starter for the Sportif as it leaves their town. Additionally, local food champions will have the opportunity to be nominated across the route celebrating the range of local fare on offer to the cyclists.

From spring 2018 each Host Town along the route of the Wild Atlantic Way Cycle Sportif, including Skibbereen and Bantry, will have the opportunity to partake in the Best Host Town Welcome Award initiative, and highlight how their welcome stood out, so each town needs the support of their local community to give the Sportif a warm welcome. Schools will also be involved with a Transition year students initiative whereby one school along the route can nominate up to five TY students to join their local stage of a 2018 Sportif.