John Caulfield who led Cork City to a historic League and Cup double is November Cork Person of the Month. Since John took over four years ago, he has the players and system in place, to create a truly great City team. Observers say his impressive “man-management” is one of his great skills and reasons for his great success this season.

“John Caulfield has brought the success, the excitement and the crowds back to Cork soccer, reminiscent of the glory days of Hibs.and Celtic teams in the ’70’s “ said awards organiser Manus O’Callaghan. 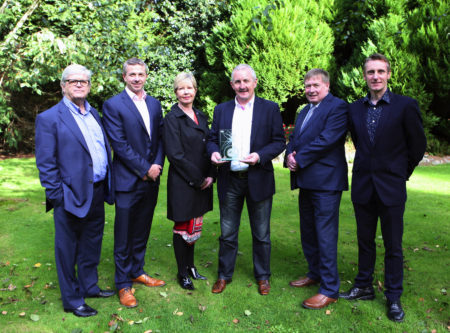 “Champions of Ireland, we know what we are“ is the new City fans chant over the last few days and weeks..

Cork City captain Alan Bennett said “ John Caulfield’s drive is relentless. The intensity of the man just blows me away. You arrive in on a Monday morning – being a bit older you’re a bit tired – but after meeting with him for 15 minutes you want to burst into training. He’s setting standards that this club will have to stay at and, hopefully, our recent successes is a big watershed moment for Cork City. “

Newly capped International and ex-star player with City Seanie Maguire, now with Preston, said “ I owe the Club and in particular John Caulfield everything “.

Niamh O’Mahony of Foras, the Supporters Trust that owns and runs Cork City FC said “ The manager has revitalised the club since arriving in 2013 – his dedication, hard work and obsession for getting every detail right. John bears the brunt of high expectations and few will ever see the impact of small, subtle conversations and decisions behind the scenes.”

Star Player now Star Manager John Caulfield is indeed one of Cork’s newest sports heroes. His name now goes forward for possible selection as Cork Person of the Year at the Gala Awards Lunch on Jan 19th next at the Rochestown Park Hotel.

SOCCER: Cork City win the Irish Daily Mail FAI Cup
Previous Post
THINGS TO DO IN CORK: The Matrix (1999) to be screened at Cork Science Festival