‘Just because you have a disability, it doesn’t mean you can’t achieve’

Rebel Wheelers, a Cork based IWA (Irish Wheelchair Association) Multi-sports Group, has partnered with Cork On Ice this year to help empower young people with a physical disability and raise much needed funds.

The club offers children with a physical disability (walkers and wheelchair users) an opportunity to participate in a variety of sports in a safe, fun, confidence building environment, from basketball to rugby, boccia to athletics, and everything in-between. They promote independence, healthy living and wellbeing through participation in sport. Nothing is impossible for this group of inspirational young people, even a wheelchair whirl on the ice! 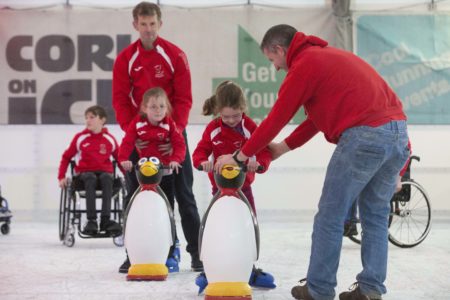 Cork On Ice has started a fundraising and awareness campaign for the much-deserving charity this year and aims to raise €50,000, kicking it off with a donation of €5,000. SuperNova are also partnering on the initiative.

As part of the awareness campaign, Cork On Ice has also launched a promotional video that tells the story of Dylan McCarthy and his mother Sandra. Dylan was walking up until the age of 9. In 2010 he was diagnosed with Ehlers-Danlos syndrome, a progressive disease.

Commenting, Sandra said, “The first thing I wanted to do was protect him, put him into bubble wrap. I didn’t want him to do anything, and my immediate reaction was that it’s going to be difficult for him to achieve. But that all changed with Rebel Wheelers. For Dylan, it has been a life saver. To get that support from each other is vital! Now we keep telling him that just because he has a disability doesn’t mean he can’t achieve in life. We’ve done everything over the past few years, tried every sport, and thought what’s stopping the kids from ice skating?”

Dylan said, “There are no boundaries with the Rebel Wheelers. We can do anything that anyone else can do too. It might be a little different, but we can still do it. Being pushed around the rink at speed gives such an overwhelming feeling of freedom, and it has helped so many of my peers. It’s great to see the little ones try it for the first time.”

Also commenting, Bill Cremin CEO of Cool Running Events and Cork On Ice, said “It’s very important to us that our ice rinks in Cork and throughout the country are all-inclusive for people with disability. The Rebel Wheelers are a fantastic group that have been coming to Cork On Ice for years and we are extremely proud to support them. Their vital work helps transform the lives of young people throughout Cork. We really hope the public will get behind the campaign and help us to raise much needed funds.”

Founded in 2007 by five families with the support of an IWA sports development officer, the club now caters for over 50 members. The Club is 100% run by volunteers and all off the monies raised go back into the club and is used for equipment and club running costs, including basketball chairs, container storage, hall hire, rugby chairs, and expanding the hugely successful strength and movement program to cater for more children.

Commenting, Dermot Hurley, Chairman of Rebel Wheelers, said that as a result of their Saturday Morning club being so successful in introducing and fostering a love of sport, it has placed a massive demand on the club to ensure it can cater for the individual needs of children as they peruse their sport of choice. So “The main objective of this fundraising campaign is to purchase much needed equipment. We are currently using chairs that don’t fit the young people in our club. It’s like an abled body child playing football with boots 5 sizes too big for them. As the club continues to grow the need for storage grows which is why we need to purchase a second container to store the bulky equipment. This year we also established a Snr Basketball team so we badly need new chairs for these adults, to ensure a path way for life long involvement in sport. Our final goal for the coming 12 months is to expand the strength and movement program from 24-36 weeks and increase the number of participants. We would like to sincerely thank everyone who has supported us in this campaign.”

If you would also like to get involved and show your support, please go to the RebelWheelers fundraising page on https://www.gofundme.com/rebel-wheelers or you can access it via www.iceskating.ie #AbilityNotDisability