A pleasant evening at O’Donovan’s Hotel on Friday 1st December saw the Clonakilty Mayoral Council honouring 11 local people who have excelled in areas of sport, volunteerism and human endeavour and generosity. Over the last few years, the Mayoral Council has organised two such events during the year-long terms of each respective Mayor. Along with around 50 guests joining the honourees, Mayor John Loughnan extended a welcome to all explaining that the five-person Mayoral Council selects nominations over a 2-3 month period for consideration. He said the honourees on the night reflected all that was good about Clonakilty.

Each honouree was then called forward where Mayor Loughnan presented them with inscribed glass bowls (generously sponsored by an anonymous donor), and his four colleagues – Gretta O’ Donovan, (Deputy Mayor); Colette Twomey; Anthony McDermott and Cionnaith Ó Súilleabháin, read out the citations on the personalised scrolls and they presented them also to the special guests. After receiving the awards, the honourees each said a few words of thanks to people who have contributed to their success or assisted them in their personal journeys. The Mayor concluded the formalities by thanking all involved in the evening especially the anonymous donor who sponsored the glass presentations and O’ Donovan’s Hotel who sponsored the food and non-alcoholic beverages after the event. 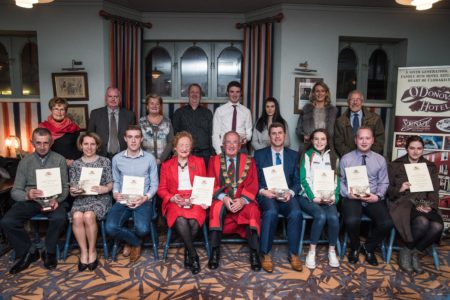 Those who received the Mayoral Awards were:

Gráinne O’ Keeffe, who donated one of her kidneys a few months ago to her friend Fiona O’ Donnell, who also received an award in recognition of her positivity and inspiration to others with illnesses. (Fiona was unfortunately unable to attend on doctor’s orders, and her award was accepted by her sister, Yvonne Evans).

Mike Deasy and Noreen Minihan each received awards in recognition of their lifetimes of voluntary activities in the community.

Mike Keohane, (Liver Transplantee) was recognised for his achievements as a Sportsperson at European and World Transplant Games representing Ireland.

Trina Fitzpatrick was recognised for her endeavours representing Ireland on the world stage in Kickboxing.

Tara McCarthy for being appointed CEO of An Bórd Bia and prior to that Bórd Iascaigh Mhara.

Jamie Googan was honoured for overcoming adversity and his work as a Mental Health and Disability Rights advocate.