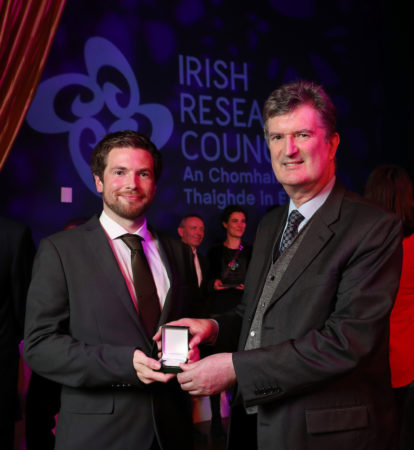 Dr Dan O’Brien, a native of Bishopstown, County Cork, has been awarded the ‘Maurice J Bric Medal of Excellence’ from the Irish Research Council.

The ‘Medals of Excellence’ have been named after previous Chairs of the Irish Research Council and recognise excellence in the 2017 postgraduate and postdoctoral funding calls run by the Council in both science, technology, engineering and mathematic (STEM) fields and the arts, humanities and social sciences (AHSS).

Chair of the Irish Research Council, Professor Jane Ohlmeyer, congratulated the awardee: “I am delighted to congratulate Dr Dan O’Brien on receiving his Medal of Excellence.

“Dr O’Brien received the award for being the top-ranked postdoctoral researcher in the arts, humanities and social sciences category, with his research in considering the intertwining fiction of Philip Roth and Edna O’Brien.

“This year is a milestone year for the Irish Research Council and its forebears as we are celebrating 15 years of funding excellent research across all disciplines.

“Over the past 15 years, the Council have awarded 7,776 researchers across all disciplines of research. Having a vibrant research community – and strong public support for research – is now more important than ever before.

“I would like to take this opportunity to commend all of the previous Council Chairs, members, Directors and staff of the Irish Research Council and its forbears and would like to wholeheartedly acknowledge their respective contributions to the work of the Council.”

Researchers of the Year Awards

Dr Martin O’Halloran, NUI Galway was awarded the ‘Researcher of the Year’ award for his research in medical electronics. Dr O’Halloran is a senior lecturer in the School of Engineering and Informatics in NUI Galway and is Founder-Director of the Translational Medical Device Lab in University Hospital Galway;

The two Council-funded researchers received their awards for having made a highly significant and valuable contribution to research in Ireland over their career to-date in their respective fields.

Dr Natalia Muñoz-Wolf, Trinity College Dublin was awarded the ‘Thomas Mitchell Medal of Excellence’ for being the top-ranked postdoctoral researcher in the science, technology, engineering and mathematics category. Dr Muñoz-Wolf’s research is in investigating determinants of morbidity and mortality in pneumococcal disease.

Ms Miriam Cummins, Trinity College Dublin was awarded the ‘Eda Sagarra Medal of Excellence’ for being the top-ranked postgraduate researcher in the arts, humanities and social sciences category. Her research is in post-secularism, gender performativity and performance in the postcolonial world.

Ms Aisling Heeran, Trinity College Dublin was awarded the ‘Jane Grimson Medal of Excellence’ for being the top-ranked postgraduate researcher in the science, technology, engineering and mathematics category. Ms Heeran’s research is investigating the clinical relevance of the radiation-induced bystander effect in rectal cancer patients.