MARKETING IN CORK: #Decembeard campaign is like Movember… but in December 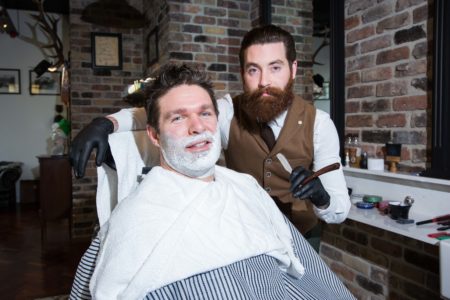 Join Decembeard and grow a beard to beat Bowel Cancer

This December the Mercy Hospital Foundation is asking men from all across Cork to ditch their razors and grow a beard to support the diagnosis and treatment of Bowel Cancer, raising awareness of the disease, its symptoms and the need for early diagnosis. Decembeard was officially launched by Munster rugby player Billy Holland in the newly opened Tom Winters Barbers on North Main Street, where Holland pledged his support to the campaign.

Bowel Cancer (also known as Colorectal Cancer) is the second most common cancer in men, with one in ten men likely to be diagnosed with the disease by age 85. With Bowel Cancer projected to increase by over 120% by 2040, and almost 2,500 new cases diagnosed each year, now is the time to raise funds and awareness, and really make a difference. In 90% of cases, if diagnosed early, Bowel Cancer can be successfully treated.

In the run up to Christmas, Decembeard encourages men to embrace this initiative along with the main man himself, Mr Claus, who sports one of the most famous beards in the world. So, if you want to grow a beard, or maybe you already have a beard and you just want to lend the weight of your bristles to the campaign, there are three easy steps to get involved:

The Mercy Hospital Foundation is also asking pubs all over Cork to recruit groups of lads to grow beards for the month, with many of the pubs already registered, set to host shave offs during the festive period.

Speaking about the campaign, Micheál Sheridan, CEO at the Mercy Hospital Foundation said “No man should die unnecessarily from cancer, and initiatives like Decembeard create a platform for men to discuss these topics and hopefully encourage them to visit their GP when they feel something is not right. This campaign is about raising funds but it’s also about raising awareness – so I’m encouraging men of all ages to ditch the razors for the month and start talking about men’s health with friends and family.”

Munster Rugby’s Holland is encouraging men of all ages to join the campaign this December. Speaking at the launch he said “I am delighted to lend my support to this important campaign. I hope men from all over the city and county will join me and wear their beards with pride, knowing that the funds they raise will help save lives and improve outcomes for all those affected by Bowel Cancer. And remember even if you can’t grow a beard, do something else and perhaps support someone who is”

Register at www.mercyfundraising.ie and use your face-rug to make a difference this December. You can follow all the latest hairy updates using the hashtag #Decembeard