CHARITY: SHARE Thanks the People of Cork for Their Continued Support 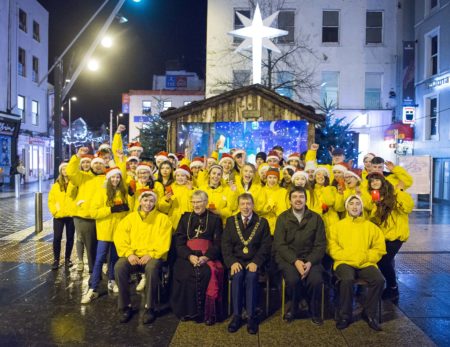 The generosity of the Cork public during SHARE’s Fast & Fundraising campaign ensures the organisation can continue its good work in 2018.

Now in its 48th year, the annual S.H.A.R.E (Students Harness Aid for the Relief of the Elderly) Christmas Campaign, drew to a close this Christmas Eve after weeks of hard work on the part of 1,800 students from the 21 Cork schools involved. This year’s campaign was a resounding success, thanks to the kindness of the Cork people and all those who contributed to this extremely important organisation in the lead up to Christmas.

Speaking following the recent completion of the 10-day campaign, Ben Corcoran, Chairperson of the SHARE Executive said: “As students in Cork we have heard of the generosity the people of Cork show to SHARE each year, but experiencing it first-hand this year has blown us away.” The 5th year student at Presentation Brothers College went on to explain that the generosity of the public is particularly poignant at this time of year, saying: “The experiences my fellow students and I have had the pleasure of gaining this year have been humbling, enlightening, and have helped to mould us in ways we never expected. While we are aware that we are doing our bit, it is also encouraging to see the outpouring of support from people who make a donation with a smile, knowing that they are also helping others at this special time of year. While we aimed to motivate each other during our collecting in the rain and the cold, the true motivators for us were the people of Cork.”

He added: “On behalf of the young people of SHARE, I would like to thank every individual who helped support the campaign this year.”

The yellow SHARE jackets are particularly synonymous with the Christmas season, as it is the only time of year that fundraising takes place for the organisation. Monies raised through the Christmas Fast & Fundraising Appeal are vital for the maintenance of SHARE’s 146 housing units, which are located in seven locations across Cork City. This annual campaign also allows for the provision of much-needed services for the older people at The Brother Jerome Kelly Day Care Centre at Sheare’s Street, Cork on an on-going basis.

While those directly involved with SHARE’s Student Executive worked tirelessly in the lead up to December’s fundraising activity, helping to coordinate and manage each aspect of the campaign, they also give their time to the organisation all year round, visiting the residents of the SHARE community. Whether it’s joining their older friends for a game of cards or bingo or exchanging stories, their frequent visits to the SHARE Day Care Centre provide not only the residents, but the students themselves, with a great deal of joy.

Ben echoed this sentiment, saying: “The SHARE experience is like nothing else and I would wholeheartedly encourage as many students as possible to get involved. We have laughed and cried and become firm friends with not only our peers but also with the residents we visit. It has been surprisingly rewarding as well as enjoyable. With that said, none of this would be possible without the public’s continued support of SHARE, so once again I would like to extend a huge thank you to the wonderfully generous Cork people.”