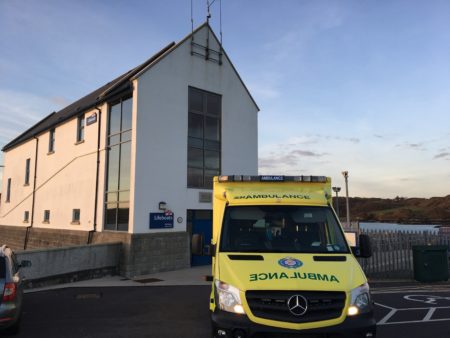 Baltimore RNLI carried out a medical evacuation last night (Saturday 12 May) from Cape Clear Island off the coast of West Cork.

The volunteer lifeboat crew was requested to launch their all-weather lifeboat following a request from the Irish Coast Guard at 8.05pm to provide medical assistance and evacuation to a man working on the island.

The all-weather lifeboat arrived in Cape Clear at 8.24pm and the casualty was transferred to the care of the volunteer crew onboard. The lifeboat then returned to Baltimore lifeboat station at 8.50pm and handed the casualty over to the care of HSE Ambulance crew who were waiting at the station. Conditions at sea during the shout were calm with a south-westerly force 3 wind and 0.5m sea swell.

Speaking following the call out, Kate Callanan, Baltimore RNLI Volunteer Lifeboat Press Officer said: ‘So far this year medical evacuations make up a high percentage of the call outs for Baltimore lifeboat. Acting as an ambulance between the islands off the coast of West Cork is a vital service and our volunteer crews are trained to a high standard in first aid and casualty care. If you find yourself at sea or on an island in need of medical assistance, call 999 or 112 and ask for the Coast Guard.’