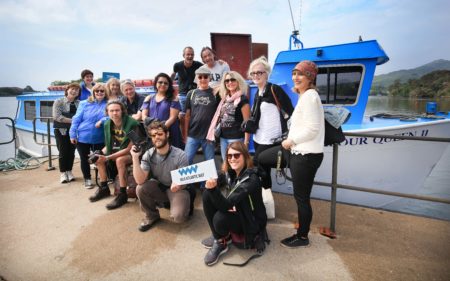 Fáilte Ireland is this week hosting a group of influential international media from the US, Canada, India and Europe with a combined circulation of over 13.6 million who are in Ireland on a press trip. Organised in conjunction with Tourism Ireland, the Southern Peninsulas & Islands tour promotes West Cork and Kerry.

A bespoke itinerary was created to entice the journalists who include a representative from US travel and lifestyle network, Matador Network, which is the world’s largest independent travel publisher with over 8 million monthly visitors. Also included in the group were writers from the Huffington Post, Canada and Germany, a freelance journalist for Elle India magazine and Holland’s national newspaper AD Algemeen Dagblad with over 1.2m readers.

“Bringing international media to Ireland and showing them what is on offer plays an integral role in ensuring that we get our message out there – Ireland is a must-see place to visit. These trips are a wonderful opportunity for overseas media to come and experience at first hand the Wild Atlantic Way and are pivotal to placing our great tourism assets in front of a large audience.”

The visiting media are experiencing for themselves the many activities and things to do on Sherkin, Whiddy, Garnish and Bere Islands with an exciting itinerary provided by Fáilte Ireland. The group are meeting with locals including Tommy Moyles, one of five farming families who set up West Cork Farm Tours, local historian Tim O’Leary, to take part in the Whiddy Island’s Walk & Whiskey Tour, early morning kayaking with Nathan Kingerlee in Glengarriff Bay, a guided tour of Garnish Island, falconry display with Geoffrey O’Donoghue at Sheen Falls Lodge, Kenmare and some sheepdog demonstrations with Noel Kissane at Kissane’s Sheep Farm, Moll’s Gap.

Last year was a bumper year for international media coming to Ireland from 20 overseas markets. Over 1,400 representatives from print, broadcast and online channels across the world descended on our shores during the year providing Irish tourism with an overall reach to over 9.2 billion worldwide. The equivalent advertising value of this reach is estimated at over €104 million. Fáilte Ireland, together with Tourism Ireland, co-ordinated over 400 different itineraries resulting in the media representatives meeting with over 4,000 Irish businesses across the country.