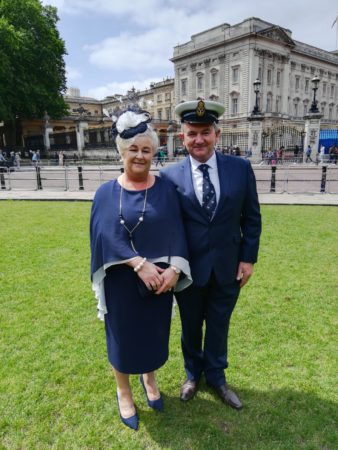 Pictured enjoying the Queen’s Garden Party in Buckingham Palace on Tuesday last, (5 June) are Seamus and Susan Mason from Youghal RNLI.Former station mechanic Seamus Mason who has been a volunteer with the RNLI for 30 years was recently nominated to attend the garden party by his Area Lifesaving Manager Joe Moore in recognition of his service and dedication to Youghal RNLI over the last three decades.

He was joined at the event by his wife Susan, secretary of the fundraising branch in Youghal, who herself has dedicated more than 15 years to the charity as a fundraising volunteer.

Speaking after the event, Susan said: