A new Atlantic 85 B class lifeboat for Kinsale RNLI is to be officially named Miss Sally Anne Baggy II – Never Fear, Baggy’s Here during a ceremony at the Kinsale lifeboat station at 2pm this Saturday, 25 August. The lifeboat which only went on service last month was funded by Miss Sally Anne Odell who has been a close friend of the station and a generous benefactor until her death last year. 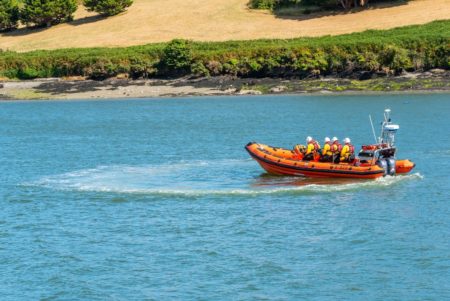 Pictured conducting training with Kinsale RNLI crew is the new inshore Atlantic 85 class lifeboat.
The new boat is named Miss Sally Anne Baggy II – Never Fear, Baggy’s Here, in honour of Sally Anne Odell, a lifelong supporter of the RNLI who was known to the crew as The Godmother.
Picture. John Allen

The lifeboat will be accepted on behalf of the station by Helm James Grennan and named by Valerie Good, Chairperson of the fundraising team who will be representing the donor.

The Atlantic 85 class lifeboat replaces the Miss Sally Anne Baggy, which has been retired after 15 years of dedicated service that have seen her involved in countless high profile incidents including the rescue 30 young people from the training ship Astrid in 2013, and plucking three fishermen from treacherous seas as their trawler Sean Anthony sank in 2016.

Speaking ahead of Saturday’s lifeboat naming ceremony, Kevin Gould, Kinsale RNLI Lifeboat Operations Manager said: ‘This is a very special occasion for our lifeboat station and although it is tinged with sadness as Sally Anne is no longer with us, we want to give her lifeboat the naming ceremony befitting its status. Sally Anne was a lifelong supporter of the RNLI and was affectionately known to the crew as ‘The Godmother.’ She will always be remembered by our community and we will forever be grateful for her care and affection. She funded the original Kinsale lifeboat and part of the station, and kept in close contact with the crew throughout the years.’

The Atlantic 85 is a B class inshore lifeboat designed to operate in shallower water. It is one the fastest lifeboats in the fleet with a top speed of 35 knots. Inshore lifeboats like the Atlantic 85 are ideal for rescues close to shore or cliffs, among rocks, or even in caves. They can handle challenging open sea too and operate in a force seven in daylight and at night up to force six winds.