Author Louise O’Neill is Cork Person of the Month

Critically acclaimed writer and columnist Louise O’Neill from Clonakilty has been named Cork Person of the Month for August 2018. Her books include Asking For It, Only Ever Yours, Almost Love and The Surface Breaks. She also writes a weekly Irish Examiner column, which often covers such topics as gender politics, women’s rights and challenging subjects like anorexia and bulimia.

“Louise is a feminist and very politically engaged. She is one of Cork’s bravest and most honest writers as well as being a great writer. Her work is important for both young and old alike and for both male and female.” said awards organiser Manus O’Callaghan.

Ms O’Neill’s Asking For It examined rape culture in Ireland and the issue of sexual consent. A spin-off play on the book and an RTÉ documentary on the subject has since been produced. A movie is also in pre-production and the play will be back on stage this November at the Abbey Theatre, Dublin. 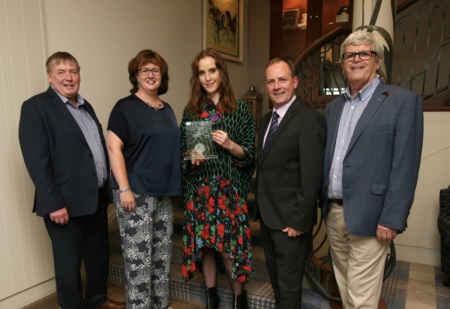 When she started publishing back in 2014, The Guardian called O’Neill “the best Young Adult fiction writer alive today”. She now writes for a general audience and her Irish number-one bestseller Asking For It has won numerous awards. Her work is in constant demand and attracts film and television rights from production companies globally.

Louise O’Neill’s name now goes forward, with the other monthly award winners chosen this year, for possible selection as Cork Person of the Year at a Gala Awards function on January 18th, 2019 at the Rochestown Park Hotel, Cork.

Louise O’Neill completed a bachelor of arts in English studies at Trinity College and a post-graduate in fashion buying at DIT. She worked as assistant stylist for the senior director of Elle magazine in New York before returning home to write in 2012. Her mother Marie was an English teacher, her sister Michelle is also a teacher and her father Michael is the well known owner of M.J. O’Neill Butchers, trading as a family business in Clonakilty since 1909.