Cork East Fine Gael TD and Minister of State at the Department of Justice & Equality, David Stanton has urged Cork East locals to vote for Michael D. Higgins in the upcoming presidential election on Friday 26 October. 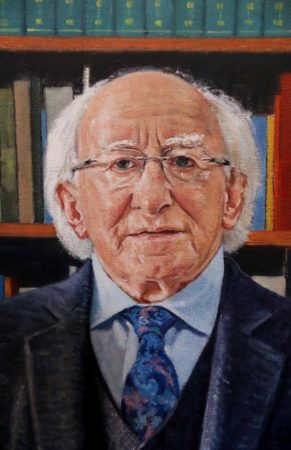 The official portrait of President Michael D Higgins has been hung in Leinster House today, and we’ve got to say, it’s a fantastic likeness. File photo: Official Presidential Portrait of Michael D Higgins. It was painted by Clare artist Mick O’Dea and portrays Higgins standing at his neatly organised desk in front of bookcase.

Ahead of the election, Minister Stanton has encouraged voters to give current President Michael D. Higgins their number one vote, saying: “In supporting Michael D. Higgins, we acknowledge that over the last seven years he has been a model president who has brought great dignity to the office and earned great affection from the nation. “He is a strong unifying force for our country, a great ambassador at home and abroad, a caring and compassionate advocate for our people and a president in whom we can all be proud.

“All his life Michael D. Higgins has been an advocate for justice and progress. As Minister for Equality, Immigration and Integration, I acknowledge that he was fearless in challenging inequality and injustice issues as a member of both Seanad and Dáil Éireann.

“Michael D. was at the forefront of campaigns for progressive change on issues such as the introduction of divorce, access to contraception and equal rights for women. As a consistent voice for equality, he fought for elimination of poverty and a ‘citizenship floor’ of basic rights. He also championed issues including decent employment, public housing provision, the rights of people with disabilities and ethical standards for public office holders.

Minister Stanton continued: “Michael D. Higgins led the 1916 centenary process with great dignity and sensitivity and deepened public discourse on remembering the past. This experience and leadership is crucial for the next seven years with the forthcoming commemorations of the War of Independence and the Civil War.

“While the polls look positive for Michael D. Higgins, we cannot be complacent. There are a number of other candidates vying to be president and we need to maintain momentum for the current president and make sure everyone turns out to give him their number one vote on Friday. Fine Gael is committed to supporting his re-election for another term and we are encouraging everyone in Cork East to lend him their fullest support.”