Cork’s Housing Action Group are protesting today, calling on members of Cork City Council to declare that the crisis in housing and homelessness is a National Emergency. 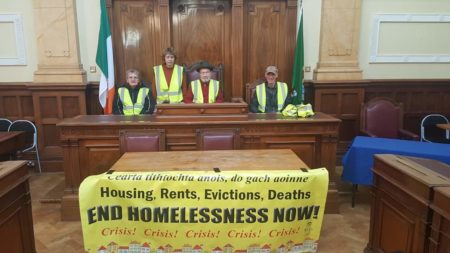 This morning at 11am a group of protestors began an occupation of the Council Chamber in City Hall.

In a statement by the groups chairperson, Mr Tony Walsh, they have condemned the waste of public money on projects that are not essential:

“Council seems more concerned with corporate image and large scale development projects than with delivering on housing rights – millions are being wasted on a bridge that no one wants and on other such extravagant waste.”

Above: file logo. Cork City Hall is the HQ of Cork City Council, which is the “housing authority” for Cork City

“To spend €300,000 on a logo is insulting to those families in social housing who badly need repairs made, for damp proofing and insulation. There seems to be an attitude in City Hall which finds money for such costly non-essential schemes but claims to be hands-tied when delivering services to people.”

Later today, at 5pm, a public protest takes place outside City Hall, the rally will hear a significant announcement on the escalation of the campaign – details will be released after that time.