LOTTO: Bumper day of pay-outs as players from Cork, Dublin & Tipperary claim over €1.6 million in prizes 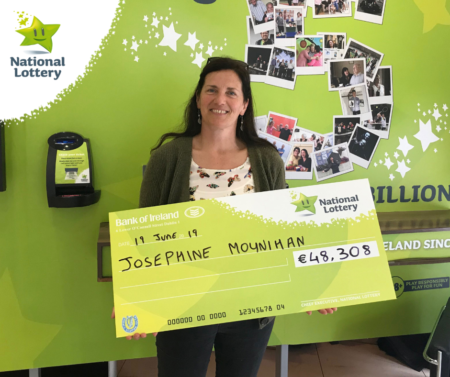 Photo caption: Josephine Moynihan from Co. Cork was among five winners to claim over €1,675,708 in prizes at National Lottery headquarters in Dublin today. She claimed her €48,303 Lotto Match 5 + Bonus prize which she won on Wednesday 22nd May.

It was another busy day in the National Lottery winners’ room in Dublin city on Wednesday as five separate players from Cork (2), Dublin (2) and Tipperary claimed an incredible €1,675,708 in National Lottery prizes.

The biggest winner of the day was a joyous family syndicate from Co. Tipperary who claimed a life-changing €1 million prize which they won on the Daily Million draw on Wednesday 12th June.

The family who wish to remain private bought their winning ticket in Dunnes Stores in Roscrea, Co. Tipperary.

After receiving their cheque for €1 million, the father of the Tipperary family syndicate promised that his family won’t be getting carried away with their new found fortune.

He said: “As a family, we already have everything we need so I can’t see us going on a massive spending spree just because of the €1 million. They only plans we have is to pay off our mortgage which will be a massive help. We certainly won’t be splashing out on any new cars but I have promised myself four new tyres for the banger I’d driving around at the moment,” he laughed.

Another happy family syndicate claiming a huge prize today was a close family group from Cork city who shared a €500,000 EuroMillions Plus prize which they scooped on Friday 14th June.

The winning ticket was purchased at Buckley’s Kiosk at Merchant’s Quay shopping centre on Patrick’s Street in Cork city.

While still coming to terms with their €500,000 windfall, the family will pay off their mortgage while they will also spend some time putting a plan in place to fund their children’s education in the future.

It was a work day like no other for another lucky Dublin work syndicate who claimed a €91,415 Lotto Match 5 + Bonus prize which they won on Saturday 15th June. The winning ticket was sold at the Applegreen service station on the Malahide Road in Swords, Co. Dublin.

Also claiming a Lotto prize today was Josephine Moynihan (pictured) from Co. Cork who pocketed a cool €48,308 which she won on Wednesday 22nd May with a ticket she purchased at Dano’s Supervalu in Mallow, Co. Cork.

Josephine plans celebrate her win by travelling to Australia and the USA with her family in the next couple of months.

Finally, two friends from Co. Dublin claimed a €35,385 EuroMillions Match 5 prize as a syndicate which they won by playing online on www.lottery.ie

The prize will be used to pay off some bills but the two friends vowed to enjoy the celebrations despite being two Lucky Star numbers away from winning Tuesday night’s €25 million jackpot.

ENTERTAINMENT, NEWS
What is it like to have dementia?
Previous Post
ATTACK POLITICS: Fine Gael and Fianna Fail in Cork upset over future projects
Next Post
Tweets by @TheCork_ie