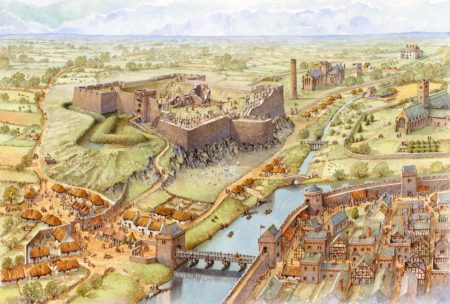 The Philip Armstrong illustration which is hanging at Elizabeth Fort

Visitors to Cork’s Elizabeth Fort can now avail of self-guided audio tours of the city’s star fort and view fascinating new illustrations of Cork in the 17th century in a new permanent exhibition developed as part of an EU Interreg project.

Produced by Abarta Audio Guides, the Elizabeth Fort audio tours are available in English, French, Spanish, Portuguese and German. In the coming weeks, Irish and Italian guides will be added.

The new exhibition entitled ‘Walls, Women, Water’ by Deirdre Black & Associates (Oli and Mark Thompson Design) was launched at the fort earlier this week. The permanent exhibition tells the story of the development of the fort – and of Cork – through maps, images and text.

It also recounts the tragic story of the 150 female convicts and their children whose tragic last steps on dry land were from Elizabeth Fort to their ill-fated ship, ’The Neva’. In their book, ‘The Wreck of The Neva’, Cal McCarthy and Kevin Todd recounted in detail how just six of the women from Elizabeth Fort survived.

An exciting feature of the exhibition is a newly-commissioned artwork by archaeological illustrator, Philip Armstrong of ‘Paint the Past’ ( attached).

The Lord Mayor of Cork, Cllr John Sheehan said: “Working closely with archaeologists in City Hall, Philip has produced a wonderful watercolour depicting Cork between 1624 -26. The archaeological detail and quality achieved in this new artwork is impressive and will be an attraction in its own right for years to come. Visitors to the Fort on Culture Night 2019 enjoyed a sneak preview of the exhibition and this illustration proved particularly popular with Corkonians and tourists alike”. 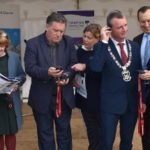 Cork City Council has been a partner in the EU Atlantic Area ‘Maritime, Military and Industrial Atlantic Heritage’ (MMIAH) project which is concerned with the sustainable recovery and re-use of under-utilized elements of the MMIAH heritage of coastal Atlantic cities.

The focus of the MMIAH project in Cork is on the enhancement of visitor services at Elizabeth Fort, which was opened to the public five years ago and has seen rising visitor numbers every year since. Last year, it was visited by 60,000 people. The MMIAH project provided significant European Regional Development Funding (ERDF) to improve the Elizabeth Fort visitor experience.

Related business: If you need a Voice Over Artist based in Cork check out www.VoiceOverArtist.ie