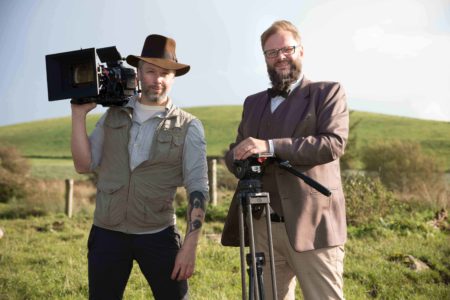 Matkanalen, a popular Norwegian TV channel dedicated to food, has been filming in Cork city and county this week, for a travel and food show called KulTour – which has around 600,000 viewers. The film crew is here as guests of Tourism Ireland and Fáilte Ireland.

KulTour involves director Finn-Erik Rognan and producer John Kaare Hoversholm travel around the world, in search of great culinary experiences. The episode filmed here will air in November – showcasing some of our unique food and drink experiences, regional produce, as well as our world-class chefs. It will feature the English Market, Frank Hederman’s Belvelly Smoke House in Cobh, the Jameson Distillery Midleton and the Clonakilty Brewing Company, as well as the Kinsale Gourmet Festival and the Midleton Farmers’ Market. The crew stayed in the Old Bank House in Kinsale.

The KulTour crew will also produce a podcast about their trip to Ireland – featuring interviews with the various people they meet during their time here.

“Tourism Ireland was delighted to invite the KulTour TV crew to come and film our superb culinary offering and some of our unique food and drink experiences”, said Julie McLaughlin, Tourism Ireland’s Manager Nordic Region. “The episode filmed here will be seen by around 600,000 Norwegians, inspiring them to put Cork and Ireland on their holiday ‘wish list’ for 2020, to experience our wonderful food and drink for themselves.

“Tourism Ireland is encouraging prospective visitors to come and sample our award-winning local produce, dine in our excellent restaurants, visit our fantastic distilleries and breweries, or perhaps take in a food trail or festival. Our message is that there has never been a more exciting time to come and discover the food scene in Ireland.”